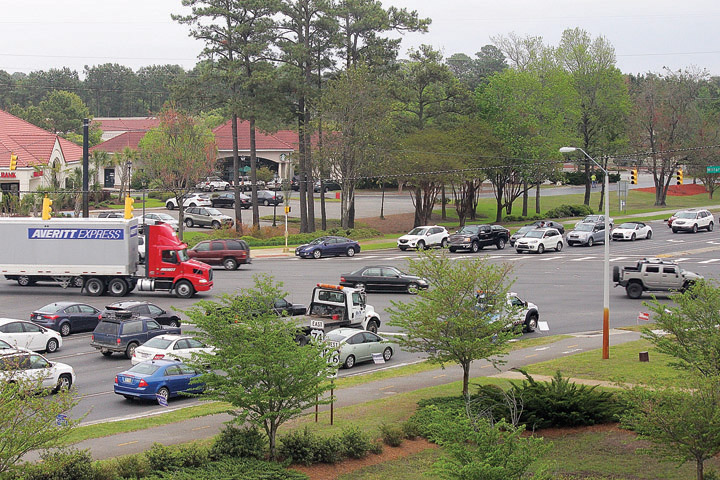 A City of Wilmington traffic engineer is working to find the fair balance for the Military Cutoff and Eastwood roads intersection as retail traffic picks up with the changing of the seasons.

“This intersection, I’ve been here five years, has always been a top three complaint-driven intersection,” Vielkanowitz said. “What it boils down to is there are just too many cars trying to get through that intersection at certain times of the day that it physically cannot process it.”

“When I pull our reports of how many cars actually drove on this road, Military Cutoff Road carries two to three times more vehicles than Eastwood Road,” Vielkanowitz said.

The difference is closer to two times more during the summer when more vehicles are heading to and from Wrightsville Beach.

Overcrowding problems generally start around lunchtime, with peak hours from noon to 2 p.m. and from 4-6 p.m.

To help with congestion, he recommends motorists ride with a friend or take alternate routes, like Wrightsville Avenue.

“It’s to the point where a major roadway project needs to happen at that intersection to really make a difference,” Vielkanowitz said. “Changing the traffic signal timing can only go so far. … Finding that balance of what’s fair gets very difficult when an intersection has too many cars. When it can’t process it anyway, we sit here and have to make some tough decisions on who’s going to get more green.”

There is a North Carolina Department of Transportation project for the intersection that has been entered into the new prioritization process, referred to as the Governor’s strategic transportation investment act, said Patrick Riddle, planning engineer with NCDOT Division 3.

“Part of that is projects that are unfunded will get prioritized on a data-driven basis and on local input,” Riddle said. “I believe this intersection is one of those projects that’s been entered as a new project into this system.”

Projects are scored based on travel time, congestion, safety, multimodal and other factors. How the project scores would determine if it will be a high or low project in prioritization among the more than 300 projects.

The project details are not yet available, except that it is listed as an intersection improvement.

“Once that project moves to a funded side of the projects, then the details will be ironed out as we move forward in planning and design,” Riddle said.

Points will be assigned for certain projects during the end of spring or beginning of summer.