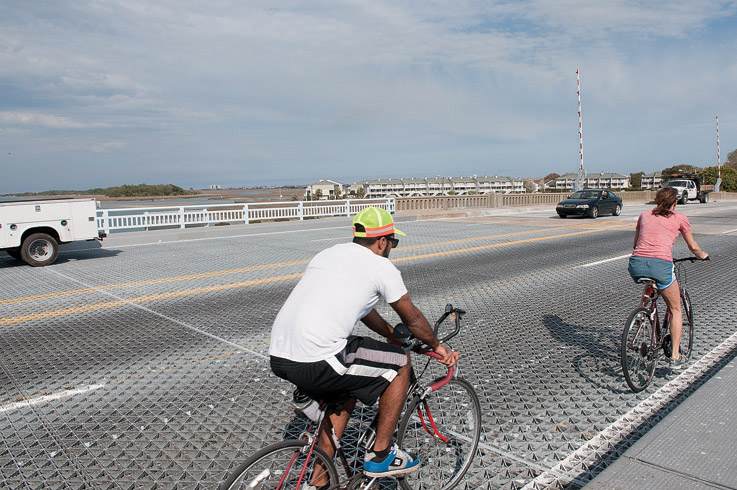 While the Heide Trask Drawbridge construction has visibly taken a turn toward completion with the disappearance of the orange cones and the reappearance of four open lanes, North Carolina Department of Transportation officials say there are still more punch-list items for the contractor to tackle in coming weeks.

The official completion date of the $8 million bridge construction was scheduled for Monday, March 31, but American Bridge Company will be finishing punch-list items for the next two to three weeks.

“We couldn’t get them to tell us it was going to be open this long two weeks ago,” Mayor Bill Blair said. “I feel like it’s mostly done.”

He said he thinks everybody is excited to see the four lanes of the bridge open, but exhausted with the length of time it took.

“Because nobody has actually said it’s over, I think everybody still thinks there might be a little bit more to come,” Blair said.

“We’re still on schedule,” James said. “We have finished our major items of work. We are still probably going to be doing punch-list items for the next two or three weeks, but it should not interfere with traffic. If it does, it will just be a minimal interference at this point in time.”

Any additional work can be scheduled during night times, she said.

“You probably won’t even know we’re out there,” James said. “The contractor is demobilizing his trailer as we speak and taking all of his stuff off the site except for what he needs to do his punch-list stuff.”

She said there may be a lane closure to tidy some of the work, but she is not anticipating one right now.

A possible replacement of a bearing could require an additional overnight lane closure. Resurfacing is planned for late May, possibly into early June, on both sides of the bridge. That work will be completed at night.

“We can be rest assured that we won’t have any significant maintenance items that will cause us to go through that sort of turmoil again. For the long term, I think it lasted longer and was much more painful than any of us thought. We shouldn’t have any problems going forward,” Blair said. “From the traffic standpoint, we will be back to normal summer traffic which in itself is a lot, but it won’t be because of the bridge. It’ll never be great during the summer, but it won’t be bad all year round like it has been.”