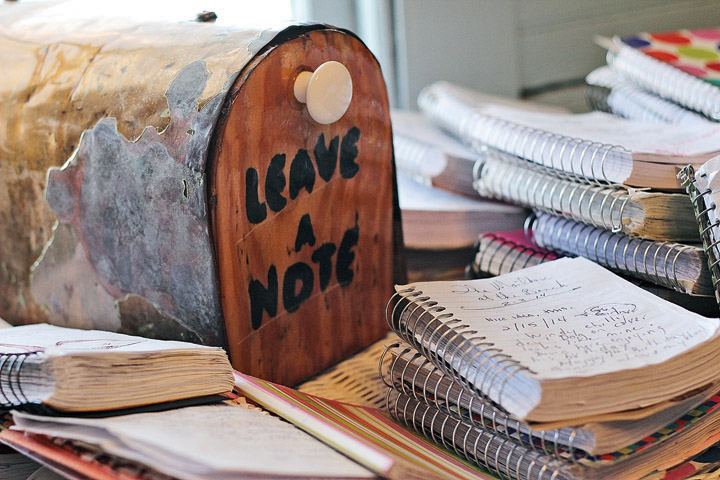 Their pages may be faded, bloated, salty and crispy, but each of the 125 journals collected from the Wrightsville Beach mailbox’s 11-year run at the north end of the island serve as a small slice of humanity.

On Easter Sunday of 2003, Bernard and Sidney Nykanen made their usual walk to the north end of the island, but on that occasion Bernard carried a 7-inch long mailbox he constructed of tin from an old barn.

“The place was so beautiful, overlooking Figure Eight Island, and I just thought, how could we make this a special spot?” Nykanen said. “Why not create a spot here to get people to put pen to paper? When you sit there it was such a beautiful spot that you couldn’t help but pour out your heart.”

The Nykanens would make the trek up to the north end every two weeks to change out the journal in the mailbox. Each time they were surprised at the amount of emotion captured in each one as the entries ranged from proposals and confessions, to bereavements, prayers and everything in between.

The mailbox had to be relocated multiple times due to the ever-changing shoreline of Masons Inlet and the north end, but it was the manmade threats to the mailbox that inflicted more damage, Nykanen said.

Most recently it was the destruction of a handmade wooden bench Nykanen had built out of 300-year-old planks from the Cape Fear River that caused the couple to remove the mailbox in March 2014.
Now the mailbox and its 125 journals have a new resting place at the Wrightsville Beach Museum.

“It would be really nice if someone took it on the way the Nykanens did and keep it out on the beach in a place that fosters meditation,” Flagler said. “If you put it up in downtown Wrightsville Beach somewhere or you put it on the museum porch it would be a different experience.”

“I just love the spot and love going there,” Nykanen said. “It was the kind of solitude everyone needs and with the birds flying around it was just a great combination with nature.”