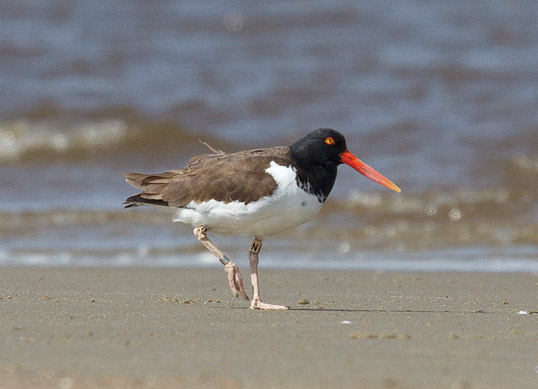 Oreo, the black-and-white oystercatcher found on the shores of Wrightsville Beach, has not yet returned. Lindsay Addison, coastal biologist with Audubon North Carolina, said she does not think it will be long before she does.

The project began in late April 2013, when the birds were captured and received their tracking backpacks, filled with 9.5-gram satellite transmitters. Since all six oystercatchers stripped their backpacks, the birds have been identified through their banding codes.

“We only see them at either ends of their range on the breeding grounds in the nesting season,” Simons said.

Through re-sightings, they were able to track to and from destinations for winter migrations, but Simons said with the satellite transmitters their routes were discovered along with stopover sites.

“They are very appealing, charismatic birds; their striking black-and-white plumage and red bills make them easy to identify and easy to observe in the field,” Simons said. “… We call it a focal species, because its life history really captures a lot of the types of issues that shore birds in particular in wildlife in the coastal zone in general are facing. They live right out on the open beach, so their habitats have been diminished extensively due to coastal development.”

Three of the oystercatchers are from the Cape Fear Region, and the other three are from Cape Lookout National Seashore.

In early March, Orange Green returned to Lea Hutaff Island from his mystery location. About one week later, Arnie returned after spending the entire winter in Sixty Bass Creek in Georgetown, S.C.

She spotted a pair of oystercatchers on the south end of Wrightsville Beach, immediately thinking one could be Oreo. But Oreo has not yet been spotted.

Shuckster, formerly known as CFX, kept his backpack on the longest.

A technique by European colleagues will slow the oystercatchers from using their sharp bills to remove their harnesses.

Thousands of people visit the site to follow the oystercatchers.