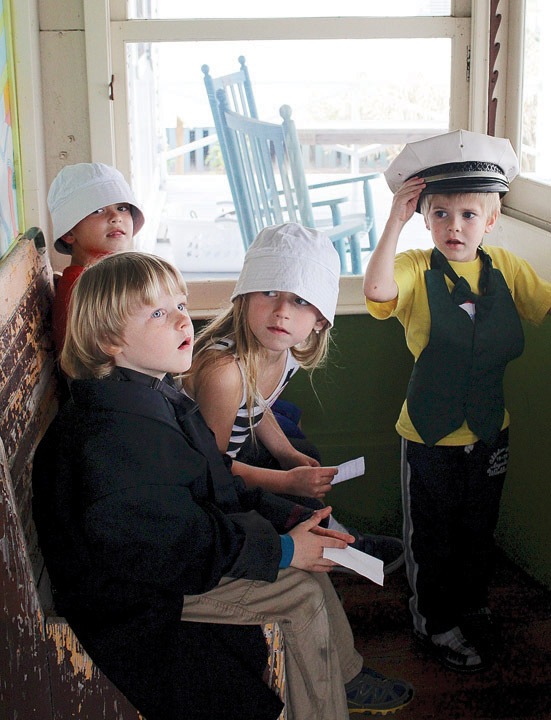 While the nearly 20 kids at the Wrightsville Beach Museum of History walked into the building as average elementary school-age kids Friday, March 28, they emerged dressed as figures from Wrightsville’s past of nearly one century ago.

There was the ice man Mr. Rose, music conductor Don Richardson, Seashore Hotel head waiter Mr. Polite, fishermen and more, all of whom boarded the model trolley on the museum’s porch at the behest of the engine man’s call of, “all aboard.”

Engine man Shannon Miller’s hat was a little large for his head, but he had no problem ringing the bell at each stop. He was happy when the ride was over as well.

“My favorite part was getting the lemonade at the end,” Miller said.

Each time Miller rang the bell and another historical figure left the trolley, each had a card to read about what he or she would be doing on the island.

Wrightsville Beach Museum of History director Madeline Flagler said March’s education program was designed to give kids an idea of what life would have been like on the beach car line.

“It went great and I am glad the weather held off,” Flagler said. “I was also glad we got a variety of ages and kids who may not have come to the museum before.”

One child who had been to one of the museum’s educational programs before was Nick McNaughton, who said he learned about the trolley system at Eaton Elementary School. However, McNaughton had not learned about his character of Mr. Polite.

“There were several that had been here before and we tried to give them an idea about how life was different then, like how important the band conductor was because there was no other source of live music,” Flagler said.

The next museum children’s program will be held on Monday, April 14, with a reading of “Woody and the Hens,” and a visit from Airlie Gardens’ border collie Reilly.