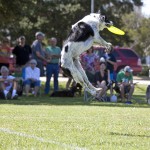 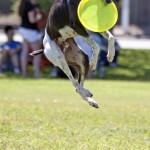 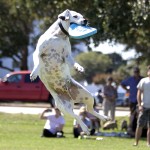 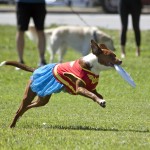 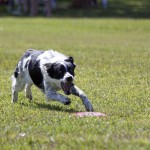 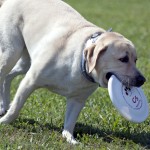 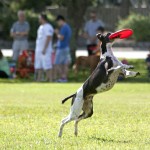 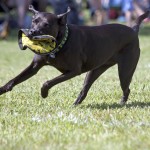 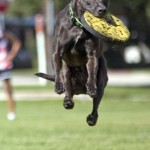 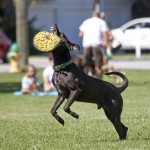 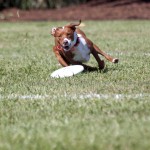 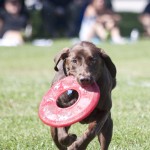 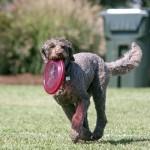 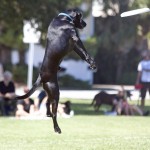 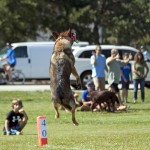 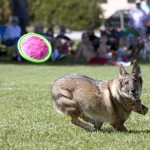 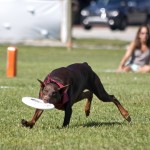 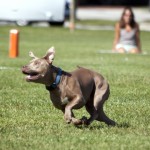 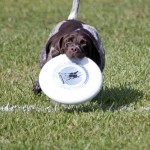 “Woof! Woof! Woof!” Maverick, a chocolate lab, jumped up and down in the grass at Wrightsville Beach Park, his eyes focused intently on the plastic disc in Patrick Smith’s hand.

“Throw! Throw! Throw!” Smith translated, tossing the disc through the air and watching Maverick bound after it. “He’s ten, going on two.”

Maverick, with all of his youthful energy, took on dogs half his age during the 21st annual Bark in the Park Oct. 4. The competition, also known as the Skyhoundz Hyperflite Canine Disc Championships, welcomed all breeds and ability levels. Minutes before the competition, event director Katie Ryan said only 13 dogs had been registered but she expected several last-minute sign-ups.

Standing near the sign-up desk, Beth Potts considered entering her dog, Chesty Puller. She said she named the yellow Labrador after a decorated U.S. Marine Corps lieutenant in honor of her son, a U.S. Marine Corps infantry officer.

Potts watched Chesty pant heavily despite the mild temperatures, debating whether to enter.

“He’s a fantastic swimmer, great with a tennis ball, but we never do Frisbee,” she said. “We’ve never done [Bark in the Park] before, so I don’t know what he’ll do.”

Luckily for the first-time entrants, the rules for competition were not extremely complicated.

“Each competitors’ team has two 60-second rounds to throw the disc,” Ryan explained. “You accumulate points based on the distance [of the throw]and whether the dog catches it, and if the dog catches it with all four paws off the ground, they get an extra half point.”

For Stretch Taylor, standing nearby with his Doberman pinschers Panama and Cherry Bomb, there was never any question whether to enter the event. Taylor has competed in all 21 editions of Bark in the Park.

“We like to come show people that Dobermans are good dogs. Like this one,” Taylor said, pointing to Panama, “he’s obnoxiously friendly. They’re just big lap dogs.”

With the athleticism of all the dogs competing, Taylor added, Bark in the Park is just as much a test of the owner’s throwing ability.

“The only limit he’s got is how far I can throw it,” Taylor said. “He outruns it a lot of the time, if I don’t get it out in front of him before he takes off…he just expects it to be in the same place it was the last time.”

Taylor said although he enters his Dobermans in a variety of disc competitions, Bark in the Park is one of his favorite events.

“It’s one of the best ones I’ve been too, including Regionals,” he said. “It’s usually a good crowd of people and a lot of dogs, and nobody’s out to cutthroat you, everybody cheers for everybody.”

As Bill Hill stood nearby tossing a heavy rubber disc for his three-year-old boxer-mix, Mr. Tappy, he voiced similar concerns. He said he wasn’t able to throw the rubber disc as far as he would a plastic disc, but Mr. Tappy had destroyed all of his plastic discs.

Mr. Tappy would not have any problem catching the disc, Hill added, but bringing it back would be another issue. “It turns into a game of ‘ok, now come chase me!’” Hill said. “And then once you catch him, it’s tug-of-war.”

Indeed, as Hill and Mr. Tappy began their first 60-second round in the competition, the dog ran circles around Hill, the disc clutched in his mouth.

“Come on, Mr. Tappy, come on, I’ll give you a belly rub!” Hill yelled, prompting laughter from the spectators.

As each team stepped up to compete, the growing crowd of onlookers was treated to amusing antics from playful dogs like Maverick, Mr. Tappy and Chesty Puller, as well as spectacular athleticism from the Doberman pinschers. Two dogs from Winston Salem, a whippet named Wii and a border collie-mix named Wyatt, accumulated the highest scores of the event.

Their handler, Todd Pope, said he takes them to compete in similar events around the middle of the state. He made the two-hour trip for Bark in the Park, he said, because it is a fun competition near the beach.

Pope acknowledged that even the most athletic competitors, like Wii, are still just typical dogs. When not leaping for a disc, Pope said, Wii puts his jumping ability to other uses.

“He can jump flat-footed on the kitchen counter,” Pope said. “I can’t leave any food around, nothing at all.”