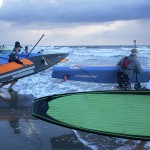 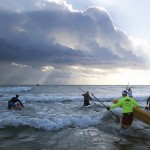 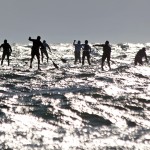 Tommy Buday beat fellow Canadian Larry Cain by seven tenths of a second during the 2014 Surf to Sound Challenge at Wrightsville Beach Nov. 1, navigating the advanced 6.50-mile course in 1:07:57.4. Jessica Rando, also from Canada, was the first female to cross the line.

Racers performed a Le Mans style beach start, entering the water in front of the Blockade Runner Beach Resort and pushing through choppy surf to reach the open Atlantic ocean.

“It was a rough start, off the beach because it was really wavy and the sun had just come out so it was in our eyes which made it hard to see the buoy,” Buday said. “Once we went downwind, it was really nice.”

The competitors paddled south with the wind, through Masonboro Inlet and behind Masonboro Island. Buday said conditions were extremely tricky through the inlet. With the strong sidewinds, all of the paddlers were swept over near the jetty rocks. After navigating the inlet, they paddled behind Masonboro Island and around the second buoy, feeling the full force of the wind for the first time.

“That headwind part just hits you and you were not moving,” Buday said. “It was paddling against a wall.”

Buday and Cain opened up a lead on the pack during the race back through Banks Channel. As they neared the finish line at the sound-side of the Blockade Runner, they were side by side.

“We were just battling the whole way,” Buday said. “We changed leads a few times but I just didn’t want to let him go ahead because I know he’s so strong there at the end.”

Cain and Buday dug in through the final yards of the race. Buday ripped his leash off a fraction of a second faster than Cain, and was able lunge across the finish line just a half-step in front of his competitor.

“It’s crazy to come down to that after a long race like that,” Buday said. “I grew up watching Larry race in flatwater and my dad was his coach for many years while he was doing his Olympics games…he’s one of my heroes.”