While many children living in the southern United States may dream of the chance to see a truly white Christmas, children old and young were able to live the dream during the record-setting snow of December 1989.

New Hanover County saw some of the highest accumulation totals with 15 inches of powdery white snow falling around the county and even more further inland in Brunswick County.

The storm, which lasted from Dec. 22-24, broke snowfall records within North Carolina and other southern states, with Wilmington at 15.3 inches and Cape Hatteras at 13.3 inches.

Steve Pfaff, warning coordination meteorologist with the National Weather Service Wilmington station, said the storm was the creation of a perfect set of circumstances.

“There was an extreme dip in the jet stream across the eastern U.S. and there was a trough in the upper atmosphere that cut across that area, and because it was so deep the low-pressure system formed much farther south and west than normal,” Pfaff said during a Tuesday, Dec. 16 phone interview. “That combination of the cold air and abundant moisture with the low moving across the area created the perfect combination.”

The Wilmington National Weather Service station possesses the longest-running consecutive compilation of weather data in the state, dating back to 1871. Pfaff said the only other snowstorms that came close were in 1973 and 1896 with just more than 12 inches of snow each.

Former Wrightsville Beach Mayor David Cignotti and his wife, Susan Creasy, were living in the same house they currently occupy along South Live Oak Drive in 1989 and remember the snow fondly.

“We got up in the morning and it was already at six inches and they changed the forecast saying there was a chance for a foot but it just kept snowing,” Cignotti said Tuesday, Dec. 16. “We will probably never have a Christmas snow like that again. I kept saying this was once in a lifetime.”

“I remember we were snowed in because we lived on the beach then but we couldn’t get out,” Evelyn Hall said during a Tuesday, Dec. 16 phone interview.

Cignotti said many of the residents that could get out walked to Hour Place, a local hangout that is now Lagerheads Tavern. 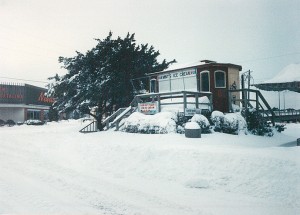 “One of the downtown places was open, Hour Place, because they had a generator, and they were serving French fries and beer,” Cignotti said. “I can remember Susan and I walking across the bridge to Hour Place, the wind was blowing across the water … and it was packed with all the local people walking there.”

Pfaff said there were no reported deaths in the area directly linked to the snow storm but the conditions caused gridlock across New Hanover, Brunswick and Pender counties for several days, leading to around 300 automobile wrecks.

Another major concern was water pipes bursting without adequate insulation on many pipes.

“A lot of home improvement stores were wiped out,” Pfaff said.

However, while combing through photos of his and his wife’s adventures in the snow, Cignotti only remembered the joy of a white Christmas on the coast.

“What was neat was that it was just a coastal storm and the people inland were not getting it,” Cignotti said. “All my life if it snowed it happened in Raleigh or farther west and we never got any but this was just the opposite. As little as we get snow it was cause to celebrate.”