You are at:Home»News»New elections director nominated by county elections board
By Miriah Hamrick on February 10, 2015 - 12:17 pm News

Less than a week after the official termination of former New Hanover County Elections Director Marvin McFadyen, a majority of the New Hanover County Board of Elections voted to tap elections supervisor Derek Bowens to fill the vacant position despite concerns raised about his lack of experience.

Chairman John Ferrante and secretary Marlene Mitchell both voiced support for Bowens’ nomination, while board member Tannis Nelson dissented. Nelson said Bowens does not have enough elections experience to serve as director. When the board hired McFadyen, she said the job required four years of elections experience and a bachelor’s degree. Bowens began working for the county elections board after earning a bachelor’s degree less than three years ago.

“This was his first job in elections and he’s worked with us now for two and a half years. … I think that we need an individual with far, far more maturity than Mr. Bowens possesses in this position, and therefore, I cannot support the recommendation to appoint him,” Nelson said. She requested the board post the opening, accept applications and conduct interviews with candidates before hiring a replacement.

Nelson also took issue with the part she said Bowens played in the 2014 release of military and absentee ballots on the county’s public email server, an incident the state elections board cited in the decision to grant the request for McFadyen’s termination. She said she might send an official letter to the state board outlining her opposition.

Ferrante and Mitchell both praised the work Bowens has put into his job, both as elections supervisor and in leading the office since McFadyen was asked to leave about a month ago, and said they have complete confidence in his ability to continue as official head of the department.

“Derek has a hundred percent of my vote. I have been so impressed since the beginning, way back when I was volunteering in the office. I am delighted with the job he has done [and]could not be happier, so I think he perfectly would fill the role,” Mitchell said.

Bowens said he plans to continue the work he has put forth if appointed as director.

“This office has run beautifully. We want to continue to insure honest, fair and accurate elections administration in New Hanover County,” Bowens said.

County elections staff unanimously supported Bowens’ nomination in a Feb. 9 letter to Ferrante, which says Bowens has used leadership and organizational skills “to improve communication, promote greater customer service, and increase the efficiency of staff members” in his time overseeing the daily operations of the office. Bowens has headed the office since Jan. 7, when the county board announced plans to request McFadyen’s removal and McFadyen was asked to leave the office. 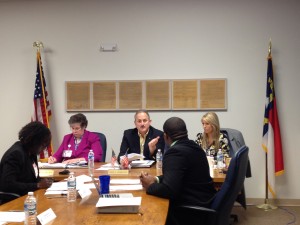 Staff photo by Miriah Hamrick. Interim elections director Derek Bowens, previously elections supervisor, presents a proposed departmental budget for the 2015-16 fiscal year that he prepared during a Feb. 10 meeting of the New Hanover County Board of Elections.

During a public comment period early in the meeting, before the board discussed Bowens’ nomination, New Hanover County Democratic Party Chairman Richard Poole and registered Republican Carolyn Hilliard Bordeaux requested the county board “cast a broad net,” as Poole said, in the search for a replacement and seek an applicant with qualifications comparable or superior to those listed in a job description on the county human resources department’s website: a bachelor’s degree and seven years of elections experience, or an equivalent combination.

While the job description lists seven years of experience, Bowens said if you “take a closer look” at the requirements, he is qualified for the position.

Hank Thomas, a 2014 Republican hopeful for a spot on the New Hanover County Board of Commissioners, asked the board to make an “immediate, clear and final decision” and to “look at what you have available” to fill the position. New Hanover County Republican Party Chairman Sam Ibrahim explicitly requested the board consider Bowens as the replacement, who he said is “competent” and “a man of integrity and honor.”

Both Poole and Bordeaux have filed complaints with the state board of elections regarding Ferrante’s leadership as chairman.

After the county board officially submits a letter officially nominating Bowens, state executive director Kim Strach has 10 days to approve or deny the request.

Although state law provides no formal process of appeal following the decision on the county’s request to remove him, McFadyen submitted a letter criticizing the decision Feb. 8, arguing a state elections board member should have tendered the decision, not staff member and deputy director Amy Strange. Strach recused herself from the decision, passing it on to Strange. The state board has 20 days from Strange’s Feb. 4 decision to defer the decision and personally hear the request.