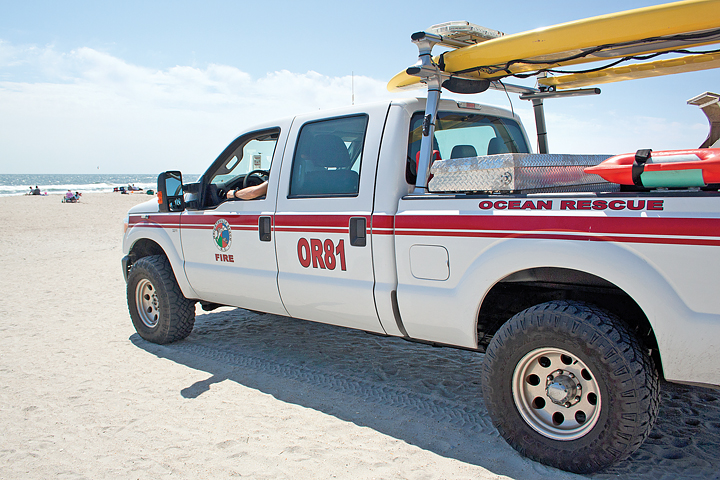 Two lifeguards will patrol the beach 8 a.m. to 5 p.m. daily during April. On weekends when beach-going weather is forecast, Baker said an extra person will be added to the patrol.

During a recent town meeting, Wrightsville Beach Ocean Rescue Director Dave Baker reported no loss of life on the beach during guarded hours last summer. Another point of distinction for Wrightsville Beach lifeguards is a new drowning protocol implemented for summer 2014.

Baker said a large number of his lifeguards attended a seminar led  by Dr. Justin Sempsrott detailing a new rescue technique for drowning victims. Sempsrott introduced the idea that rescue breaths should be performed before chest compressions on an unconscious drowning victim.

“When people have a cardiac event on land, we need to do our chest compressions, that’s what’s been taught,” Baker said during a March 26 phone interview. “But when they’re in the water, what is causing that problem is lack of oxygen. … If you’re doing compressions … you’re not circulating any oxygen.”

Now, the guards are taught to give five rescue breaths and then do compressions, Baker said.

Wrightsville Beach Ocean Rescue was the first program in the country to implement the new technique. Today, Baker said, it is the standard protocol for the state of North Carolina.

Baker said the water is warmer right now than typical for this time of year, so in addition to wetsuit-clad surfers the lifeguard patrol will watch for children playing around the water’s edge and, soon, swimmers.

“It’s anything east of the dune line,” he said. “We’re out there patrolling, helping enforce the ordinances and keeping things safe.”

Lifeguard tryouts for summer 2015 will be held April 26 and May 2. Lifeguards will undergo training during May before the full seasonal staff returns to duty.