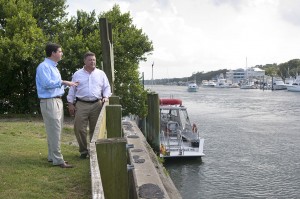 Staff photo by Allison Potter. Congressman David Rouzer, left, and Transportation and Infrastructure Committee Chairman Bill Schuster survey the Intracoastal Waterway south of Heide Trask Drawbridge at Wrightsville Beach Friday, June 19, following a morning tour of the Port of Wilmington with a press conference, and a boat ride to Southport and back with the Army Corps of Engineers.

Shuster described Port of Wilmington as “important to the United States of America.” Shuster, chairman of the congressional Transportation and Infrastructure Committee, said the port would need to grow to handle more imports and exports.

NCSPA Communications Manager Cliff Pyron said demand for ports along the eastern United States will increase when updates to the Panama Canal are finished in 2016. The Port of Wilmington will have to deepen its harbor to compete with other ports already accommodating bigger ships, such as Charleston and Savannah, he said.

“There are plenty of rules and regulations to make sure the environment is not harmed in any way,” Rouzer said.

Both Shuster and Rouzer said financing port improvements would be challenging because of tight budgets.

“Finances in many state capitals are tight,” Shuster said.

One possible avenue to funding is through the federal Water Resources Bill. Shuster said he plans to include Port of Wilmington when Congress renews the bill.

Transportation Sec. Tata was optimistic about the port remaining competitive.

“I think Port of Wilmington is in a great position for the future,” Tata said.

A June 19 press release from the port states the ports authority is currently conducting a feasibility study of the Wilmington Harbor, focusing on upgrades to the Cape Fear River to ensure the river meets current industry demands.

Following the press conference and a tour of the port including a lift into one of the port’s 200-foot-tall container cranes, Reps Rouzer and Shuster boated to and from Southport with the Army Corps of Engineers. In the late afternoon, they stopped into the Lumina News offices and then briefly visited the ICWW beneath the Heide Trask Drawbridge for a photo op.