You are at:Home»News»Scientists mistakenly spot ship off NC coast, make history
By lumina on July 18, 2015 - 11:32 am News, State News 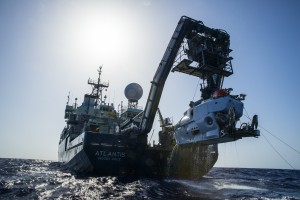 “Getting back to the ship and telling people, ‘You can’t believe what we found!’ That was pretty amazing,” he said.

Although the ship is over a mile underwater, safe from scuba divers wanting to plunder the discovery, researchers are not disclosing the exact location. Expedition leader Cindy Van Dover said the site was somewhere along the Blake Plateau, in the Gulf Stream, about 180 miles southeast of Beaufort, N.C.

Like Ball, the discovery also surprised Van Dover. “I’ve never been on a cruise where we found a shipwreck before,” she said. “I really like this little piece of history on the seabed. It has tragedy because sailors perished, [but]it’s such a human story.”

Ball, Pilot Bob Waters and Researcher Austin Todd were looking for a research mooring when they noticed an anchor chain. “It was a little confusing at first. We saw a pile of bricks, which looked really out of place on the seafloor,” he said. “Then it got to be kind of exciting.”

Ball said the next step is for specialists to explore and document the wreck. “At this point it’s been passed from us to people who have equipment to look at [the ship], and…they can do an awful lot.”