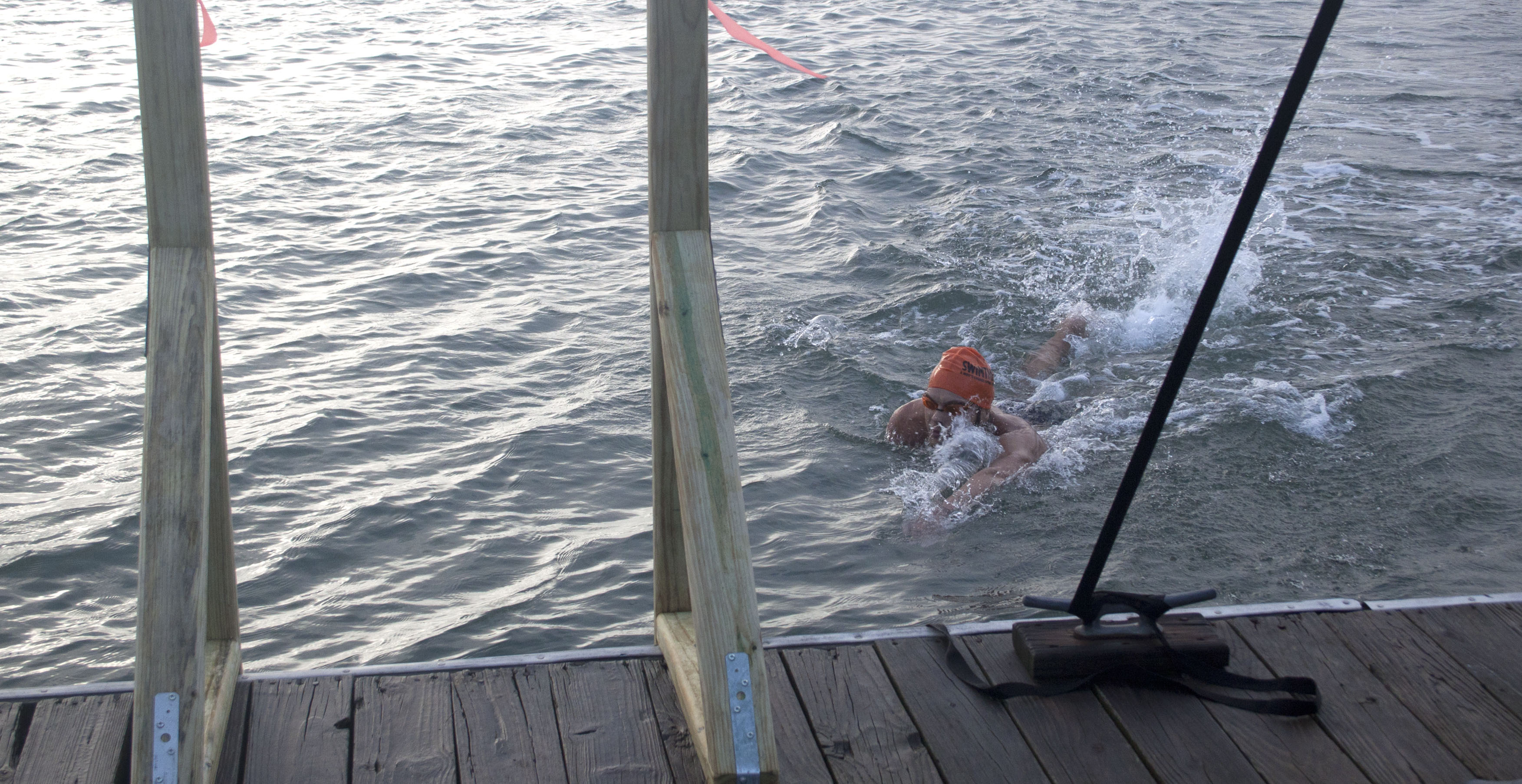 The morning before the fourth annual Swim the Loop, 2014 event winner Matthew Wisthoff wasn’t set on attempting to defend his title, having just completed a half-Ironman triathlon the weekend before. Around midday, less than 24 hours before the 3.5-mile open water race, he decided he had recovered enough from the Ironman to enter. He had also recovered enough to win.

One hour and 20 minutes after 72 swimmers jumped into Wrightsville Beach’s Intracoastal Waterway in front of The Dockside Restaurant, Wisthoff rounded a mound of marsh grass and picked his head up to sight the finish line. He stroked determinedly through the stiff current, climbed onto the dock and raced across the finish line in 1:22:55.

Wisthoff, a local professional triathlete who swims regularly in the waters around Wrightsville Beach, attributed his win partly to his familiarity with the course. Open-water swimmers typically race from one point to another with the current, but during a loop swim, at least one-half of the race is against the current and sighting and pacing are more difficult, Wisthoff said.

When the race started at 7 a.m. Sunday, Sept. 27, the 20 mph northeast winds were already creating turbulence in the waterway. The competitors swam through Lees Cut and into Banks Channel, where they had the benefit of a tailwind. The last stretch of the race through Motts Channel was mostly slack, Wisthoff said, but the final 100 yards of the race provided one last challenge. As swimmers crossed the waterway to reach the finish line, the current from the outgoing tide pushed them off course.

“I tried to aim a little bit to the right of the finish line,” first-place female finisher Alicia Uhl said.

“You were swimming over sections that three days ago you were swimming around,” he said, adding that despite being disorienting, the full tide probably allowed him to take a more direct course and shave a few seconds off his time.

In addition to the 3.5-mile loop swim, the event offered a 1.3-mile sprint course from the Blockade Runner Beach Resort to the Dockside. Four Special Olympic athletes completed the race with family members or friends swimming alongside.

This is the second year the athletes participated in the race. Tom Hull, who swam alongside Special Olympian Luke Ferris, said they returned because of the warm welcome they received from race director Kristen Smith and others in the swimming community.

“The kids just love coming to this race, they love being in mainstream events,” he said. “They fit in just like everybody else.”

Minutes later, the crowd of swimmers and their families broke into cheers to encourage the final sprint swimmer, Special Olympian Bruce McGiboney, across the finish line. Applause also erupted when Swim the Loop racer Dennis McGraw from Durham finished the race exactly four months after undergoing a hip transplant.

He said entering Swim the Loop gave him the motivation to push through his rehabilitation and heal.

“You can’t just lie around for six weeks,” he said. “It was my goal to be able to do this swim.”