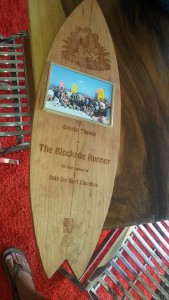 The plaque IndoJax Surf Charities presented to the Blockade Runner on Friday, Sept. 11 in appreciation for the facilities help in hosting a surf camp for visually-impaired children.

So many participants turned out for the eighth year of the Visually Impaired Surf Camp in July that the group photo on a plaque commemorating the event wasn’t big enough to fit them all in. That success is what prompted event coordinator Jack Viorel to donate the two foot long, surfboard shaped memento to the Blockade Runner Beach Resort on the morning of Friday, Sept. 11. 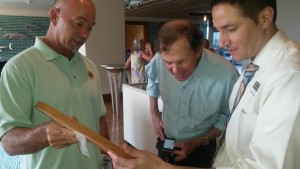 “It was bigger than we’ve ever had before,” Viorel, director of IndoJax Surf Charities, which puts on the camp for blind and visually-impaired children. “There’s no way it grows without the community support.”

A big part of that support this year was the facilities that the Blockade Runner donated for the event’s banquet. “It’s such a great event, I felt like it had to be promoted,” said Blockade Runner owner Mary Baggett Martin.

The plaque given in appreciation to the Blockade Runner includes a picture with most of the more than 40 families that participated in the camp. It was made by Kids Making It, a Wilmington wood working program for at-risk youth.

“Everyone in the program is so impressed with it,” Martin said. “It’s important that children with special needs understand that there is a community here for them.”

The event drew participants from as far as California, Washington and Pennsylvania. Viorel said IndoJax Surf Charities was working to put the event on next year as well.