You are at:Home»News»One Love tennis program receives major gift at annual luncheon
By lumina on May 6, 2016 - 9:54 am News 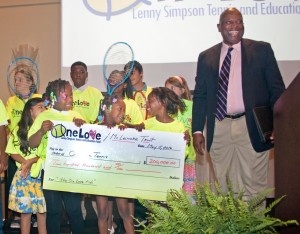 Lenny Simpson’s One Love Tennis foundation received a $200,000 donation from the McLemore Trust charitable foundation on May 5. Staff photo by Emmy Errante.

Lenny Simpson’s One Love Tennis and Education Fund received a major boost during its annual fund-raising luncheon on May 5 when table sponsors David and Carolyn McLemore presented the foundation with a $200,000 check from their McLemore Trust charitable foundation, and gifted a 15-passenger van through a business they own.

“This check just put us ahead by light years of where we were trying to get to,” Simpson said during the event at the Hilton Wilmington Riverside. “It has changed the whole face of the One Love tennis program, overnight. It will put us on a different level of reaching some of our goals. We now have to rework much of our strategic plan, because the McLemores have just taken us five years ahead, and our strategic plan was for three-to-five years. That’s what a gift of that magnitude means to us.”

Simpson, a former tennis great who became the youngest male to win a first-round match in the U.S. National Championships (now known as the U.S. Open) when he competed in 1964 at the age of 15, returned to his hometown of Wilmington in 2013 to found the program that provides free coaching, education, and character lessons to children ages 6-12, many of them considered at-risk.

The year-round program teaches some 400 children Monday-Saturday at tennis courts throughout the city.

The McLemores became aware of Simpson and the foundation at a screening of “Althea,” a documentary about tennis legend Althea Gibson — a former Wilmington resident and Simpson’s friend — presented by One Love Tennis at Thalian Hall in June 2015. They learned about Simpson’s program and were impressed by the impact it is having on area youth.

Carolyn McLemore is a Wilmington native, and the couple has lived here since 1982. They set up the McLemore Trust as a means to make charitable gifts.

“We’ve been blessed financially, and look for ways to give back to Wilmington,” Carolyn McLemore said. “We like to give locally. We’ve been looking for something that could make an impact.”

Simpson’s program met all of their criteria.

“It’s so much easier to give to people who have done things and don’t just have a dream,” David McLemore said. “Lenny has taken his dream and done something with it.”

As they got to know Simpson, they discovered he didn’t have an official headquarters. Simpson says his office is a silver Chevy Tahoe.

“Our first meeting was at a Krispy Kreme,” David McLemore said. “They [One Love] really didn’t have a home. They needed a home. That’s something this will help with.”

Simpson, who said he learned about the gift a week before the luncheon, was clearly moved when the official presentation was made.

“This just doesn’t happen every day,” he said. “For people like that to step up and to have that much passion, that much love, for this program says volumes. It’s just incredible. These kids, from these dollars, from this van, they are going to benefit immensely.”

For more on One Love Tennis and Lenny Simpson see “A Love Like No Other” in the February 2015 edition of Wrightsville Beach Magazine: www.wrightsvillebeachmagazine.com/flash/2015-2/#/58/