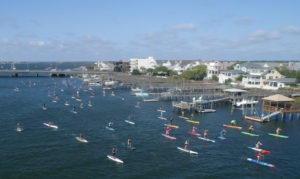 Dozens of standup paddleboard racers make their way around Harbor Island during the 2017 Carolina Cup on April 22, 2017. Drone photography courtesy of Andrew Rork of Aerial Optix.

“Winning once is hard, performing and winning consistently over time is just plain difficult,” said Anderson in a recent interview..

“I executed exactly what I wanted to do and opened up the after-burners at the 2-hour mark,” said Anderson, the top-ranked and fastest woman in the world, leaving her competitors minutes behind at the finish. “I am extremely grateful to be back and able to challenge for number five.”

Puyo’s endurance was surprising considering a 24-hour missed flight delay in Philadelphia, arriving on-site the evening before the race.

With 10 to 20 mph winds, 2 to 4 ft seas, flowing tidal inlets, and choppy flatwater, the 13.2-mile Graveyard Race, already one of the most challenging professional-division courses in the world, was even more grinding and grueling in 2017.

“Every year this race is different,” said Anderson. “It’s got a bit of everything to test our entire skill set. That’s what make it the Carolina Cup. The Graveyard Race is one of the classics.”

April Zilg, of Wrightsville Beach, finished fourth in the Graveyard Race, her best career finish in the race.