You are at:Home»News»Local artist in spotlight for Azalea Festival artwork
By Terry Lane on April 4, 2017 - 11:19 am News

With the North Carolina Azalea Festival set to start on Wednesday, April 5, local artist Sean Ruttkay is prepared to be busy. The photographer known locally for his stunning pictures of the ocean was selected as the official artist for this year’s festival.

“I’m going to be everywhere,” said Ruttkay, recognizable to many through his EDA Surf line of art. “I’ll be meeting people and signing things. It’s going to be a great time interacting with the community I love so much.”

His selection as the festival’s official artist is something of a throwback, as it has not selected a photographer for that role since the 1980s. 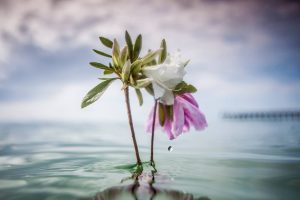 Ruttkay’s photograph, a depiction of a leafy azalea branch emerging from the ocean, is packed with meaning. But he said the idea came on a whim, after years of thinking about his entry for the festival. The Azalea Festival does not invite submissions, but rather, chooses their artists, and in 2013, after giving a presentation on “The Aesthetics of Water” at UNCW, Ruttkay learned he would be the featured artist this year, giving him three years to dream up a piece.

After many failed attempts, Ruttkay said the image that will symbolize this year’s festival came to him naturally, just as he captured an image he said serves as a reflection of time itself.

In his photograph, the ocean water serves to represent eternity. From it comes the past, represented by an azalea as a fully pink flower, the present, a white blooming azalea, and the future, a budding azalea that hasn’t bloomed.

“The past is in a soft focus, the present is crisper but thee future is crystal clear,” Ruttkay said. “I could have been safe, but I wanted to do something completely different. It represents the trifecta of past, present and future, with a water droplet representing the individual as they fall back into the eternal.”