For those that knew him, there was the sense that Tom Moorefield had sent the snow that covered the ramp used to launch snowboarders into flips and slides for a rare and unique contest in Wrightsville Beach on Saturday.

It was the third time that South End Surf Shop has hosted a Rail Jam, a makeshift snowboard contest in the shop’s parking lot where riders used a bungee-cord to pull themselves over a ramp and onto a selection of surfaces and rails, all while doing spins and tricks that drew gasps and laughs from a crowd of several dozens. The shop held a similar contest on the same day last year, where Moorefield was instrumental in helping make the artificial snow used that day when the forecasts for real snow didn’t prove out.

“It was kind of like he sent the snow again,” John Buechele said of his friend Moorefield, who died in his Greensboro Street home in May, believed by his family to be connected to over-the-counter medication used to battle opioid addiction.

Shop owner Jeff DeGroote said that the contest served as a tribute to Moorefield. After winning the contest, Shane Wall displayed the shirt with Moorefield’s image. 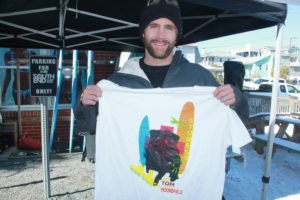 “He is why we’re out here today,” Wall said.

Moorefield took a leading role in organizing last year’s event, using a pressure washer and air compressor to create the artificial snow, and with the Wilmington area getting more than three inches of snow on Thursday, conditions were right for another running of Wrightsville Beach’s irregularly scheduled snowboard contest. However, DeGroote said that despite the snow, he hadn’t planned to organize the event until a groundswell of community interest prompted them to quickly schedule the contest.

Despite the last minute preparations, the event had a dozen entrants, with small crowds lining both sides of the contest area and circling around into the street. With several inches of real snow to use, snowboarders said Saturday’s event provided the best conditions yet for the makeshift course, which comprised of two separate ramps, with one launching onto a picnic table and the other onto a box followed by a rail.

Wall, the contest winner, set the tone early by completing a head over heels flip, igniting excited gasps and cheers when he stuck the landing. The trick was talked about by spectators throughout the day. Wall also won the first ever Rail Jam, held at South End Surf Shop in 2012 following a snow storm that produced a lighter dusting, but he said the snow cover on Saturday was far better than the prior efforts.

“This was way better, we have so much snow,” said Wall, describing how this year snowboarders didn’t have to contend with the gravel of the parking lot.

Despite not having much of a hill, the contest organizers figured out a way to use a bungee cord for propulsion, with three or four people pulling the cord back, giving the boarder some pull while the launch team would push the snowboarder towards one of the two ramps. For the snowboarders gathered there, the unique event was also quite challenging.

“You go zero to too fast in three milliseconds, hurling yourself at man made objects, and then landing in gravel,”said Ryan McInnis, a local diver and photographer who was once a sponsored snowboarder.

But for the group of boarders, the opportunity to snowboard with their friends was too much to pass up, with most of the participants sporting years of experience on the slopes. For example, McInnis was sponsored by the Burton snowboards and Wall recently returned from being a snowboard instructor in South Lake Tahoe, Calif.

“The hardest part is the quick setup. You have about two seconds to make it happen,” Wall said of the event’s unique challenge. “You have to have trust in the guys letting you go.”

After each run, a group of snowboarders would pull back on the bungee cord, which was attached to a post near the front of the parking lot. The boarders would have between 15 to 30 feet to gain speed before launching into their trick, with some never getting the speed or direction correct, either leaving them short or launching them off target.

“It seems like you’re going fast, but once you release, you lose your speed,” said Mike Edge, who brought the bungee cord used in the contest. “You have to hold it until you get where you’re going.”