Altogether, the Town of Wrightsville Beach’s water and sewer system has a value of $66 million, the town’s board of aldermen learned Tuesday, but it also needs $12.5 million in upgrades to address ongoing issues and improve delivery during peak hours.

Engineering firm McKim & Creed presented the report to a joint meeting of the Wrightsville Beach Board of Aldermen and its ad-hoc water and sewer committee, which was formed to address both water quality and demands on the system’s aging infrastructure. The report’s findings also showed that customers on the Wrightsville Beach water and sewer system pay some of the lowest rates in the area, with an average cost of $96.75 per month. Only Jacksonville had lower rates and Wrightsville Beach’s rates averaged $13 a month less than the Cape Fear Public Utility Authority rates. 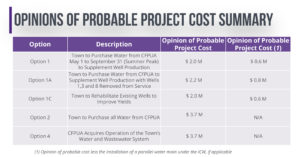 The report addressed five broad recommendations that ranged from improving the town’s water and sewer infrastructure to buying water from the neighboring CFPUA. Most of the recommendations focused on a combination of either buying supplemental water from CFPUA from May through September or improving the town’s infrastructure. Among the options it laid out included upgrading piping to meet the increased water pressure, taking some wells offline, adding a second water main underneath the Intracoastal Waterway or rehabilitating existing wells to increase yield.  Costs for these options varied from $600,000 to $800,000, with an additional $1.4 needed in any scenario that would construct a parallel water main.

While the firm concluded it wasn’t feasible to integrate the town’s water and sewer infrastructure into the CFPUA system, it said for a cost of about $3.7 million the town could opt to buy all of its water from the CFPUA, which would save the town on operation and management costs, but could also produce higher rates.

“The materials are a bigger issue than the age of the pipe,” said said McKim & Creed’s Tony Boahn. It’s not going to fall apart tomorrow.”

Meanwhile, Wrightsville Beach Mayor Bill Blair said the report gave the board of aldermen something to work with on the issue when it has its upcoming meeting. During the meeting, Blair said that the town’s enterprise fund could be used to address some of the needed upgrades.

“This answers a lot of questions,” Blair said. “We have some resources in place to take care of this.”