Wrightsville Beach, and the silhouette of two of its local residents, will play a central role in attracting tourists to the state in 2018 as the town’s beach strand is one of three images featured on the 2018 Official North Carolina Travel Guide.

Along with a a brilliant sunrise that stretches over the front and back of the magazine-sized publication, the guide’s cover features two surfers – a man and woman – walking with boards in hand. Those surfers are Wrightsville Beach’s Tony Butler and his wife, Jennifer DiLullo Butler, who are also featured on a photo spread inside the guide.

This annual guide features three cover photos, one representing the state’s beaches, one showing the Piedmont area and one highlighting the mountains.

Eleanor Talley, public relations manager for Visit North Carolina, said the state’s beaches are consistently cited by tourists as one of the top three reasons for traveling to the Old North State, along with visiting friends and relatives. 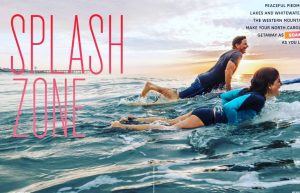 Visit North Carolina will distribute 500,000 copies of the guide, including stocking it in the state’s nine visitor centers.

“It gives added exposure to our area. We’re really proud of it,” Nelson said.

The 2018 “Official North Carolina Travel Guide” leads travelers to dining discoveries from Asheville to Wilmington, water-filled adventures from the Alligator River to Turtleback Falls, and a tricentennial voyage through history with Blackbeard. With today’s announcement of the guide’s release, Visit North Carolina launched three different Travel Guide covers, which reflect the state’s diversity of natural beauty and travel experiences. The coastal cover features a couple with surfboards in the early morning glow at Wrightsville Beach. Liberty Warehouse in lively downtown Durham reflects the urban energy of the Piedmont’s cities. Rafters on the French Broad River north of Marshall signal adventure in the mountains.

“The Travel Guide provides inspiration for visitors to North Carolina that lead to richer experiences,” said Wit Tuttell, executive director of Visit North Carolina. “It’s the promise of grand landscapes and simple pleasures, epic adventure and perfect serenity, dramatic history and soul-stirring moments. Whatever inspiration a traveler seeks, North Carolina has a way to satisfy it.”

First-time features inside the guide include a 10-question pop quiz and visitors’ Instagram photos of North Carolina lighthouses. “The Pirate Life” tracks Blackbeard to his riotous end, a 1718 duel to the death off the island of Ocracoke. Vivid photos and succinct text draw attention to art, culture, and momentous histories in New Bern, Fayetteville and Cherokee. And “Incredible Eats” whets appetites for celebrated treats and suggests between-bite activities.

Travel planners will find assistance from a two-page map with major roads, bodies of water, parks, and cities and towns. Regional directories list accommodations and attractions in hundreds of destinations.

2018’s “Official North Carolina Travel Guide” is free. The 172-page print edition is available at the state’s nine Welcome Centers; it can also be ordered at VisitNC.com and 800-847-4862 (800-VISITNC). Beginning Dec. 14, readers can link to a digital magazine version from VisitNC.com. The digital version, which includes all three covers, is enhanced by information pop-ups, a social media share feature, search functions and clickable URLs. Responsive design technology automatically adapts the digital guide to desktop, mobile and tablet devices for a seamless, user-friendly experience, no matter how readers access it.

The 2018 Travel Guide, the official guide for North Carolina’s state tourism office, was produced by Meredith Travel Marketing. It was financed by private industry support with nearly $730,000 in advertising in the 500,000 printed copies. Listings for the 900 attractions and 2,900 accommodations and campgrounds were provided for free. The self-mailer format for printed copies reinforces the green initiatives of Visit North Carolina, which is part of the Economic Development Partnership of North Carolina (EDPNC). The EDPNC is contracted by the North Carolina Department of Commerce to execute North Carolina’s marketing and recruitment functions. The partnership serves to assist efforts in economic development, international trade, and tourism, film and sports development.

Tourism remains one of the state’s most vital industries with economic activity and employment generated in each of the state’s 100 counties. In 2016, domestic travelers to North Carolina spent $22.9 billion, which accounts for 218,340 jobs for North Carolinians. State and local tax revenues, as a result of visitor spending, approached $1.9 billion in 2016. Tourism spending creates $497 in annual household savings. North Carolina ranks sixth in total person-trip volume by state behind California, Florida, Texas, New York, and Pennsylvania.