You are at:Home»News»Community News»Wrightsville Beach Elementary students explore their passions with Shark Tank projects
By Daja Terry on May 21, 2018 - 10:58 am Community News

From wristbands that hold daily reminders to jewelry that would raise awareness—and money—for endangered animals, students at Wrightsville Beach Elementary last week applied their entrepreneurial spirit to their personal passions, creating a series of products that were evaluated similarly to the Shark Tank television program.

With 22 total projects up for display, the students of the Wrightsville Beach Elementary School Academically and Intellectually Gifted (AIG) program pitched their ideas to teachers, fellow students and a handful of parents during the May 17 event at the school’s cafeteria.

Katherine Kochakji, Gifted Education Specialist at the school, wanted the students to be able to do something different this year, and she let her students decide on a Shark Tank-themed, year-long project.

“I wanted them to pick a project based on their passions and invent something related to that,” Kochakji said.

GianLuca Minichino presented his idea of EchTech, headphones and earbuds for blind people that detects objects and helps them “see” through echolocation.

“I got my inspiration from this old man that clicks his tongue and uses the sound bouncing off of things to navigate,” Minichino said. “I want EchTech to have its own stores—like Apple—in major cities with a large blind population.”

Children from other classes visited the cafeteria to learn more about their peers’ work as their two-minute pitch videos played on a screen at the front. 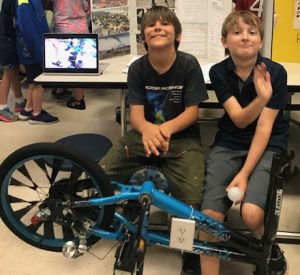 “When I announced it at the beginning of the year, Michael and Nate came to me and said they knew exactly what they wanted to do,” Kochakji said. “They pitched it to me and I just said, ‘What?’ I couldn’t believe it.”

On the back wheel, the boys built a fan into the spokes, and as the user works the pedals, it powers a generator attached to the bike. It is powerful enough to light up a light bulb, at the least.

“When the power goes out and it’s really hot, you’ve got A/C,” Trofimchuk said.

“And when it’s dark, you have some light,” Pringle added.

The duo listed their bike at a cost of $70, what they say is a reasonable price to pay for a sustainable generator that can be used in emergency situations.

Adreina Henson invented Sticky Styles, a company that encourages customers to send in their old clothes to preserve the style in duct tape.

Cruz Turner and Everett Hoerdemann came up with a social media app called Game On. In the app, users would be able to list their stats, communicate with other players and, since it’s available across all consoles, XBox players can compete with PS4 players or PC gamers.

Shelby Roche’s Earth Clothes makes clothing from organic cotton and different essential oils. “They’re better for the environment and you,” she said.

For environmentally friendly, sustainable solutions to plastic waste, Parker Joyner and Everett Lain invented Soda Straws that would contain little bits of candy inside of paper straws, allowing the customer to put a straw into a cup of water and taste lime or grape or orange without buying the different types of soda. 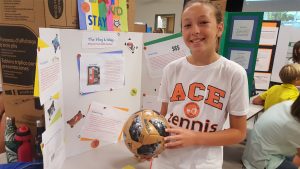 Bella Hocker’s focus on health, fun, and convenience led to her invention of the Play and Stay, a vending machine that allows customers to rent or buy toys, such as beach balls and Frisbee.

“Nearly one in six kids have issues with obesity, but with Play and Stay, you don’t have to bring anything with you and you can be active,” Hocker said.