With a proposed 23-acre residential development working its way through Wilmington’s approval process, the state’s transportation department is modifying its plans for the nearby interchange project that would build n overpass for Eastwood Road to cross Military Cutoff Road. A public meeting on the new designs is scheduled for Monday, June 25.

The change in the proposal comes as several new projects in the area work their way through the Wilmington city government. The Wilmington Planning Board on June 6 unanimously approved the CenterPoint mixed-use development at 1531 and 1541 Eastwood Road, leaving only city council approval needed. The project is located to the west of the Eastport subdivision, with the extension of Drysdale Drive splitting the subdivision from the mixed-use development.

About half the size of The Avenue, the CenterPoint project would include several of the same offerings, including a seven-story, 200-bed hotel, as many as 60 retail shops, up to 300 residential apartments, more than 100,000 sq. ft. of office space and parking for more than 1,700 cars.

The North Carolina Department of Transportation will hold a public meeting regarding the proposed conversion of the Eastwood Road and Military Cutoff Road intersection to an interchange.

The meeting will take place on June 25, 2018 from 5 p.m. to 7 p.m. at the College Acres Baptist Church, located at 702 Eastwood Rd. More information will become available on the NCDOT website and at the June 25 meeting. 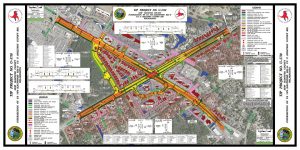