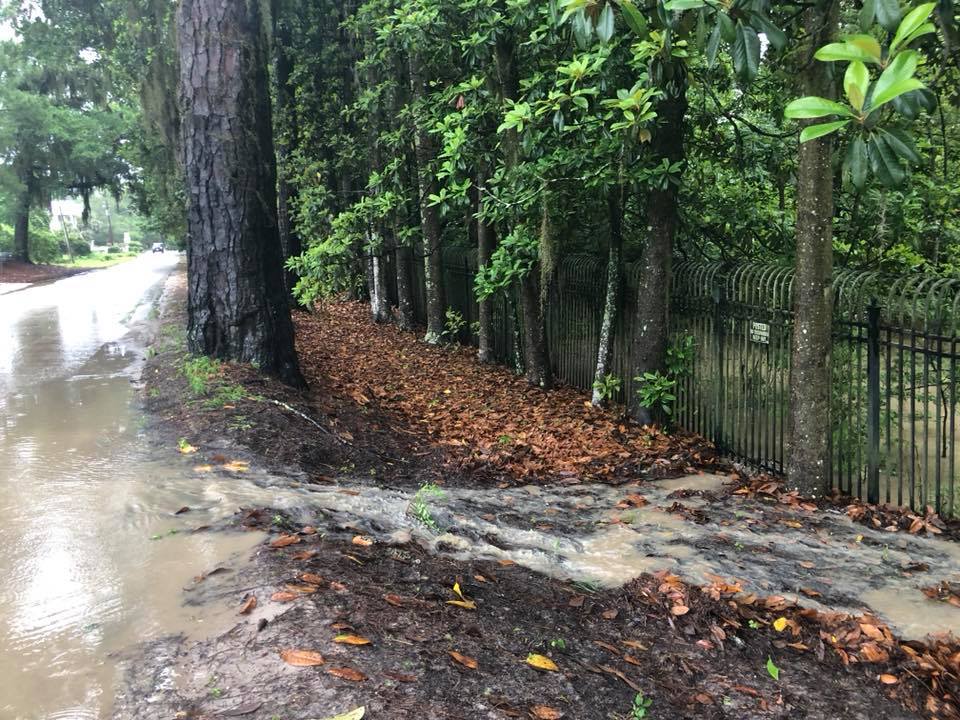 Airlie Garden officials this week said that the garden ponds are steadily improving after heavy storms over Memorial Day weekend caused water and mud to flow across Airlie Road from the neighboring 11.9 acre mixed use development across the street.

Residents of Airlie Road said their concerns about the construction on the North Carolina “Scenic Byway” came to life when the retention pond at the front of the property overflowed and brought traffic to a standstill over the weekend.

Airlie Gardens Director Tara Duckworth said that the stormwater runoff did reach the garden’s pond and cloud the water, though engineers for the city of Wilmington told her they would be able to prevent it in the future.

“It’s getting better,” Duckworth said. “When the storm first came through, everything was really silty, making it brown, but it’s improving every day. I don’t think we saw any long-term effects from it.”

The stormwater overflow comes after some residents expressed concerns about the issue before the 57-unit development by the Charlotte-based State Street Companies was approved when the Wilmington City Council voted to rezone the property to mixed-use in March 2017. State Street Companies did not return a phone call from Lumina News.

“I’m just hoping all of that heavy rain is behind us,” Duckworth said. “Unfortunately, that’s just what happens when you have open ground. It’s a temporary problem.”

Allison Tam, a resident on Airlie Road, said that the community was unsure how water would be handled.

“We didn’t like the scale of the project,” she said, referring to when the development was proposed. “We just thought, ‘how are they going to guarantee us that they’re not gonna have a problem with flooding?’ They never gave us a concrete plan. Maybe the city knows, but we don’t. We haven’t seen them adding anything draining wise.”

Currently, with the project at its infancy with mostly dirt and clay, Tam said she worries that the stormwater overflow is so extensive at this stage.

“What happens when they add a bunch of homes?” she added. “That water’s going to have nowhere to go.”

During the March 2017 hearing, Richard Collier, the project engineer of McKim & Creed, LLC, said that water would flow into an existing pipe under Airlie Road. Council member Kevin O’Grady and several residents said they were worried that there wouldn’t be enough space.

Tam said many of the neighbors were upset that the stormwater reached the Airlie Gardens pond.

“The pond was just cleaned and now this has happened,” Tam said. “The pond doesn’t have much flow. It’s stagnant. So this being added onto it? It’s a lot to deal with.”

When residents went to talk with Collier about the problems with Airlie Road and the Gardens, they wanted concrete answers to assuage their fears.

Tam said they didn’t get any.

“The city didn’t see any violations, but did they even come out here?” she asked, frustrated with the efforts of the local government. “There’s nothing more we can do other than complain about it and try to bring attention to it. Not enough people are talking about this. I’m just wondering are the people who are responsible doing their job? We just don’t know.”