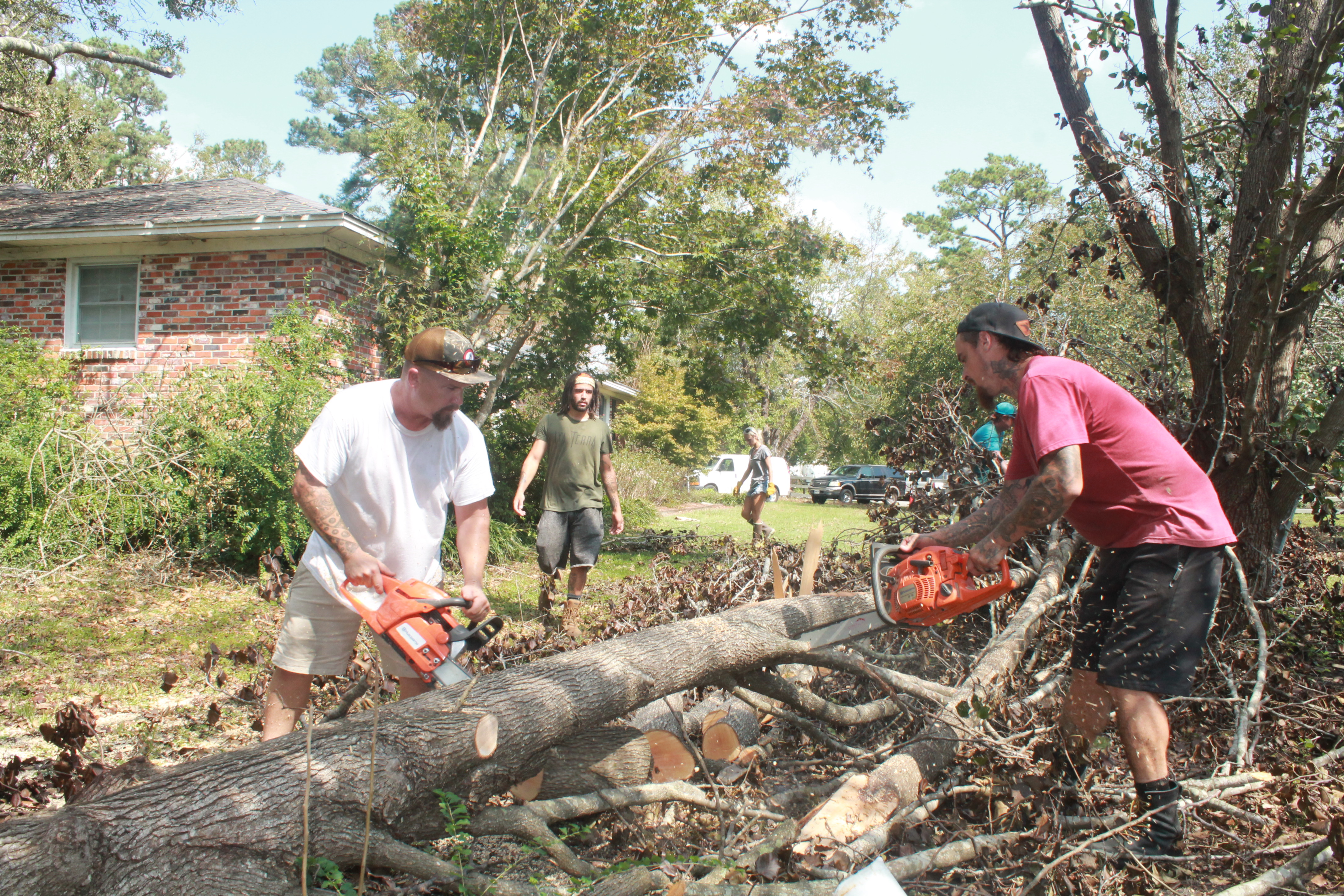 A grassroots organization that started with two guys just trying to help themselves and their neighbors raised that nearly $5,000 on its first formal day of operation on Saturday. And while Tegan Harmon was eager to raise money for Port City Proud, a volunteer tree and debris clearing operation, he knew the $15 in cash he was offered was better in the pocket of the woman who hadn’t been o the bank in more than a week.

“No ma’am, you keep a hold of that and donate when you’re ready,” Harmon told Carole Wolfe, a woman who lived off Buccaneer Road who had several trees and downed branches in her yard.

The crew of Port City Proud volunteers got to work, using a chainsaw to cut up big trees and branches, with volunteers hauling away the debris. Three crews went to different areas of town.

The project began as a simple favor for a friend, when Harmon helped his friend Drew Salley clear the trees that had fallen on his house and his road. Their primary goal was to clear the road so that power could be restored to their house. But they soon found themselves helping other people in the neighborhood clear the debris from their house.

Volunteers cleared more debris and helped more people, who in turn wanted to show their appreciation by offering money.

“We weren’t taking money, but as people are trying to give us money, we said why not take it and give it to a charity,” Harmon said.

The volunteers chose a name for their group, Port City Proud, and found a partner in Wrightsville Beach-based charity Hope from Helen, which is well known for its December fundraiser auction. The charity uses the funds to help local families in need.

On Saturday, with a fundraising method in place in the form of a GoFundMe page, the volunteers spread out among three locations, this time ready to take money from people who wanted to help. They had a successful first day, raising nearly $3,000 online and adding another $1,500 in checks. One anonymous donor gave $1,000 online.

But the volunteers got more than donations from the people they were helping, they also got their appreciation.

“One lady was in tears today,” Salley said.

“People get choked up and teared up because we’re doing this for them,” Harmon said. “And of course it feels good for us to give back, I feel not so selfish because I’m feeling gratified by what we’re doing.”

One of those expressing their appreciation was Wolfe, who said she had no idea how she was going to clear the downed trees from her home.

“I had no way of getting these limbs out of the yard and off my fence. And then a guy comes up and says “We’re out volunteering, do you need some help?’” Wolfe said. “God’s little angel popped up out of the blue for you. Something like this that touches your heart, you don’t even know how to thank them.”

Those interested in donating can find Port City Proud at https://www.gofundme.com/port-city-proud and can find more information at https://www.facebook.com/Portcityproud.nc/.