You are at:Home»News»Kids helping kids: Youth stepping up in second year of Jimmy’s bike drive
By lumina on December 8, 2018 - 10:50 am News

After last year’s surprisingly successful drive to collect bicycles for the Toys for Tots program, the owners of the Wrightsville Beach bar organizing the fundraiser are getting strong participation from an unexpected source as they seek to improve upon last year’s totals while building a new holiday tradition.

As word spreads about Jimmy’s Wrightsville Beach bike drive this year, more kids are helping their less fortunate peers by bringing in bikes, in many cases spending their own money or raising money, owner Jimmy Gilleece said.

“The interesting thing about this year, is that we’ve seen more kids stepping up and donating,” said Gilleece, adding that the goal was to outraise last year’s total of 201.

One ambitious grade schooler has brought in eight bikes so far, and she said she’s not done yet. Caroline Merrifield, a 9-year-old attending Ogden Elementary, raised money from her parents and friends to buy the bikes, which she said was helping her to have a Merry Christmas.

And what started as one simple gesture has grown into a full-blown fundraising drive. 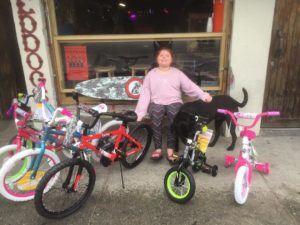 Caroline Merrifield, 9, has donated eight bikes to the drive, and has raised money for two more.

“My mom told me that Jimmy’s was doing a bike drive and we went to buy one, but I really liked it so I wanted to keep buying more,” she said.

Merrifield has raised enough to buy at least two more bikes this year and plans to save money she will get from family for Christmas this year to buy more bikes for next year’s drive.

After first discovering the bike drive while having dinner next door at King Neptune restaurant, 9-year-old Christian Castiglione, a Wrightsville Beach Elementary School student and local surfer, saved his report card money to purchase a bike for the drive.

“Donating made me feel good, I am going to start a tradition where I save the money I get from every report card near Christmas and donate a bike every year,” he said.

Having started accepting donations on Nov. 15, Gilleece said that the drive has already brought in at least 90 bikes, with more than a week to go before the Dec. 15 cutoff.

The donations are part of the seventh annual Toys for Tots drive, organized by local band L-Shaped Lot and their lead singer Eric Miller, which will conclude on Saturday, Dec. 15 with a concert Saturday night at 6:30 p.m. at the Brooklyn Arts Center in Wilmington. The drive is also being promoted on FM radio station 98.3 The Penguin, where Miller works as a DJ.

In the meantime, those looking to participate, but aren’t able to buy a bicycle, can attend Bushels For Bikes, an oyster roast fundraiser on Saturday, Dec. 8 at Jimmy’s  from 12 – 5 p.m. There is a fee of $10 at the door, with all proceeds going towards buying bicycles for the drive. Anyone who donates a bike at the event receives four tickets. Local clothing brand Gunkholer is also sponsoring the event. 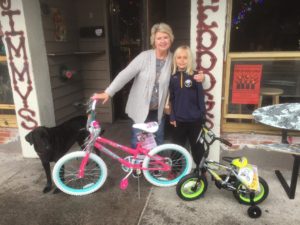 Cheryl Corbran and her grandson Christian Castiglione, 9, with bikes he donated to the drive.

Reflecting back on last year, the first year that Jimmy’s Wrightsville Beach participated in the Toys for Tots bike drive, Gilleece had set a modest goal of only 10 bikes, which he said he would match. Gilleece used his social media following to challenge the Wrightsville Beach community to meet the goal.

What followed was a community outpouring that shocked Gilleece and co-owner Keaton Cline.

“Within the first day I had that challenge met, and then it just exploded from there,” Gilleece said.

To help encourage participation, Gilleece and Cline established a new tradition for those who bring bikes to the bar’s location at 5A North Lumina Ave., featuring a photo with their bikes and the bar’s ever-popular mascot, Kruiser, a black lab who can often be found hanging out with the establishment’s patrons.

Not only are the people of Wrightsville Beach coming forth and demonstrating their generosity and Christmas spirit by donating for Toys for Tots, but a few locals have been helpful in other ways.

“One of our neighbors behind us, Josh Martin has been kind enough to let us store the bicycles in his garage,” Gilleece observed.  “Also, Two Men and A Truck donate their trucks and time to move the bikes, which is really awesome.” 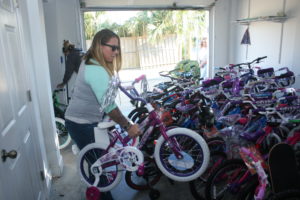 Steph Brownelle helps store one of the four bikes she donated to the Jimmy’s Wrightsville Beach Toys for Tots bike drive.

The staff at Jimmy’s has also been helping out, Gilleece said, especially since many donate bikes through Amazon and other online shopping outlets, having them shipped to the bar to be assembled. Referring to himself as “St. Nic,” longtime Jimmy’s bartender Nic Metcalf has been staying busy during his daytime shifts building bicycles.

“I think I assembled at least 30 bikes the other day, I’ve basically got it down to a science and it feels good, you know,” Metcalf said. “Being a retired Sergeant in the United States Marine Corps, helping put together bikes and work with the Toys for Tots organization makes me feel good that I can be able to work with the Marines still while also giving back to my community.”

So far, Gilleece said he is thrilled with the response from the community.

“I know that we are going to meet our goal of 202 bicycles this year,” he said. “It’s pretty cool how the community comes out and shows their support. It feels really good to get this type of response from the people of Wrightsville Beach, especially in the off season when the number of residents is lower.”