After several months of fundraising and diligent work, volunteers are nearing completion of the renovation of Wrightsville Beach’s Harbor Way Gardens, which has been closed since it suffered extensive damage during last September’s Hurricane Florence. And the renovations are coming just in time, as the garden is one of the stops on the Azalea Garden Tour during the weekend of April 5-7.

Not only will Harbor Way Garden be ready to take visitors in April, it will have some new features to debut for visitors, said Elise Running,  a member of the Harbor Island Garden Club, which oversees maintenance of the garden.

However, the most interactive new feature at the garden will be the newly-installed labyrinth, where visitors will be able to follow a maze-like path around the circular structure. Lining the brick paths of the labyrinth will be dwarf mondo grass, Running said. 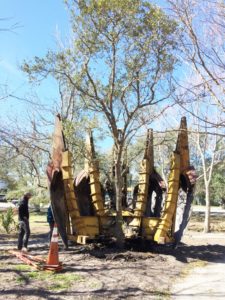 Crews plant a live oak tree in Harbor Way Gardens on Wednesday, March 13. The live oak tree, thought to be worth more than $8,000, was donated by the Oleander Company.
Photo courtesy of Elise Running

Another new feature will be a “fragrance garden,” which will be located near the labyrinth. The garden will feature Witherspoon roses that have been selected for their aroma, Running said.

There’s also a new water feature, which was installed just before the storm, but survived without damage.

More shrubbery is also coming for the garden, said Running, adding that Harbor Island Garden Club members have developed a unique way to add interest to the garden before the tour. Members will place potted annuals in locations around Harbor Way Gardens, adding color to the garden.

“The perennials are just coming above the ground,” Running said. “We had to do something to boost some interest and add some color.”

The gardens will also have two new benches. One of which was donated by Natalie Johnson and her family and will honor her late father, William D. Johnson, who many knew as “Bill.”

Additionally, paintings created by Plein Air artists at several of the tour gardens will be on display for purchase at Harbor Way Gardens on Sunday, April 7 from 1 – 4 pm.

Harbor Way Gardens will be one of the stops on the annual Azalea Garden Tour, from April 5-7.