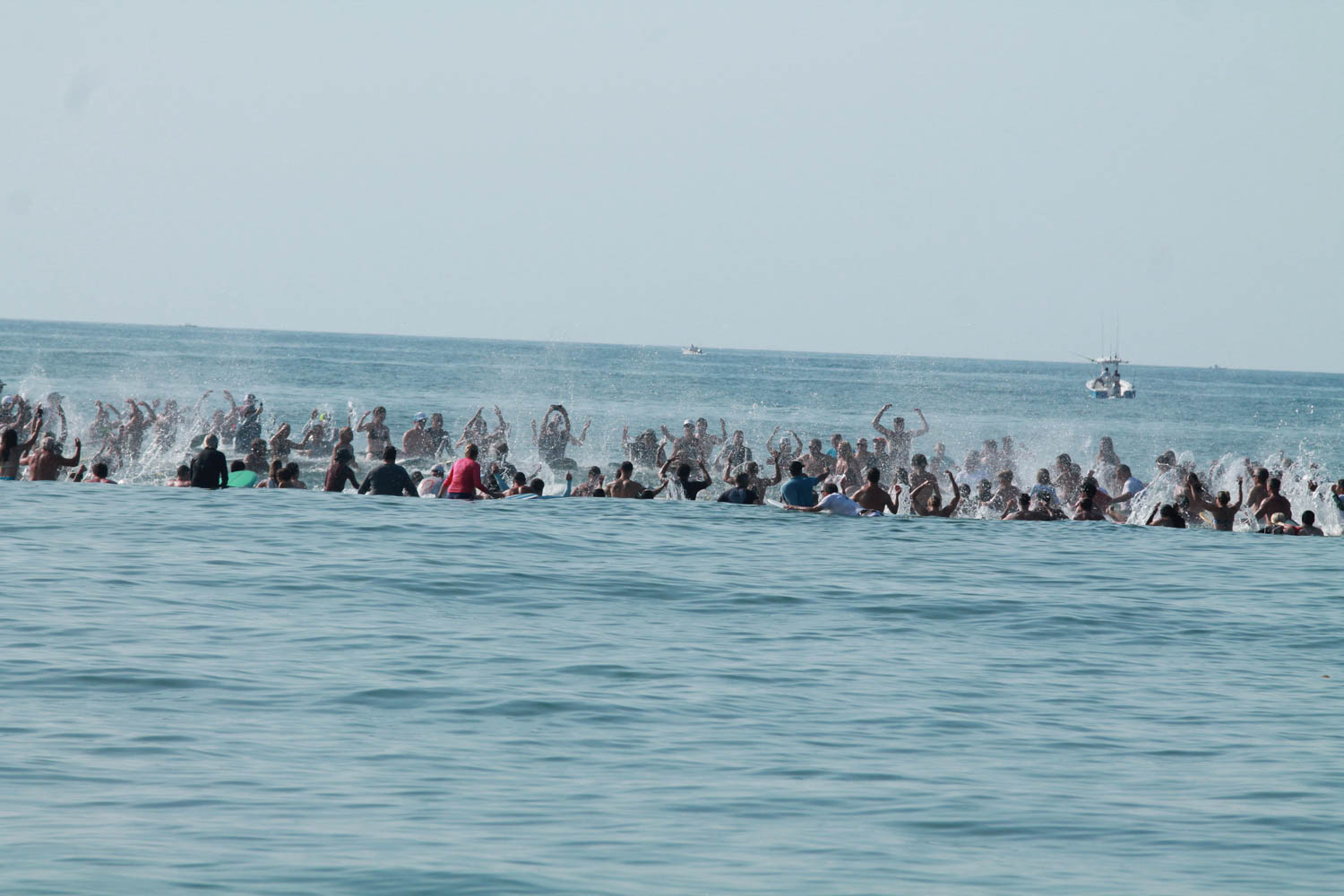 With red roses, yellow flowers and palm fronds in their fingers, boards in their arms and memories of their friend in their heart, they paddled out from Wrightsville Beach and into the circle to share stories of Josh Vach, the community figure who was remembered last Sunday as a successful restaurateur, a humble philanthropist and an unwavering supporter of beach culture.

Organizers said as many as 222 people paddled out on June 2 for Vach, the founder and owner of the Live Eat Surf chain of restaurants that included Wrightsville Beach’s Tower 7. Vach died of complications related to cancer on Wednesday, May 15 at the age of 53.

At the gathering that drew several hundred to the Stone Street beach access, where the town unveiled plaque on the lifeguard stand that memorialized Vach, family and friends remembered all he had accomplished here, from training a generation of entrepreneurs to contributing to charities that touched the heart of the community to consistently delivering funny one-liners to restaurant staff that revered him.

“He never understood the impact he was having on this community,” wife Cindy Vach after seeing the outpouring of support for her late husband. “I love that it has just completely overwhelmed me.”

One of the leaders of the 8:30 a.m. paddle out was Tommy Vach, Josh’s brother. Before expanding into a circle, the group crowded around to hear stories and memories of Josh. The paddle out attracted a wide range of participants, from relatives to friends to employees, past and present, brother Tommy said. From the shore, spectators could hear the yells and see the splashes, each marking the end of another story about Josh.

Tommy’s story to the circle involved the kidney he had donated to Josh 12 years ago.

“I said, ‘don’t worry, we’ll work out the details out later,” Tommy said. That joke created the “kidney tab,” where Tommy would tell any friend visiting Wrightsville Beach to go to Tower 7 and ask Josh to put the bill on the “kidney tab.” Josh always picked it up. And after one large party of friends put it on the “kidney tab,” Josh called to ask: “How many kidney friends do you have?”

“Josh never had to give anyone anything, but he always did,” his brother said.

Cindy Vach said that her husband would leave a legacy in Wrightsville Beach that would be remembered for a while to come.  The success of the restaurants provided Josh the opportunity to give back to the community through many charitable endeavors.

A 1987 graduate of the University of North Carolina Wilmington, where he was also a member of the school’s surf club, Josh established a surf scholarship in 2008 that has grown into the Tower 7/WBLivesurf Scholarship, which this year provided funding to more than a dozen students. He would provide free food to the annual Hope from Helen fundraiser. He also established the  Cinco de Bow Wow fundraiser, which benefited local animal welfare organizations that included Paws Place Dog Rescue, Pender County Humane Society, C.A.R.E. – Coastal Animal Rescue Effort, New Hanover County Animal Services Unit, Adopt An Angel and Canines For Service.

In dedicating the lifeguard stand plaque, one lifeguard recounted how Josh paid to send the Wrightsville Beach Ocean Rescue team to the national competition, establishing a tradition of support for the town’s lifeguards.

For his efforts, Josh was awarded the UNCW Distinguished Citizen of the Year in 2015 and was inducted into Wrightsville Beach Museum of History’s 2014 Waterman Hall of Fame for his contribution to beach culture, the first ever inductee under that category.

The restaurant chain that Vach built was popular with surfers, professional and amateur alike, with Tower 7 being a stop that many surfers had to make when here for events, said Newkirk, an organizer of local water sports events.

With museum leadership working to expand its display into the recently-moved cottage, Newkirk said the museum board would have discussions about adding recognition of Vach to its historical exhibit.

Drawing on the experience he gained from the restaurants his parents owned and operated in Ocean City, Md., in 1993, Vach opened his first local restaurant, K38 Baja Grill on Oleander Drive. Building on that success, Vach eventually opened seven more restaurants, including Tower 7 in Wrightsville Beach.

His success in the restaurant business attracted the attention of one local woman, as Cindy Parcell confided in her friend John Walter about how the two had become acquainted after meeting through an online dating site.

“He picture was on a surfboard and he owned a Mexican restaurant,” Walter said. “I told her, ‘He goes to the top of the pile.”

He married her in an October 3, 2009 ceremony held on Wrightsville Beach.

Walter, who paddled out on Josh board, said he was amazed by the outpouring of support that the community has shown the Vach family since Josh’s death.

“We told a lot of fun stories about Josh out there. From 25 years ago to current stories,” Walter said. “I was amazed to see how many past and current employees came out.”

Josh’s relationship with his employees was a consistent theme of the morning, as several recalled his inspiring workplace demeanor and talked about how “JBV,” for Josh B. Vach, had inspired them.

Mikaela Harbowy, who had worked for Josh for six years, said that he had a hands-on style of work that kept him engaged with his employees.

“He kept a strong presence, no matter what,” Harbowy said. “He did everything the way he wanted, until the day he died.”

Cindy agreed that Josh made a long-lasting impact on his employees.

“He would get letters from people who had worked for him, 10 or 15 years later, who are still in the business, saying ‘I learned it from you,’” she said, adding that his cunning wit would also be remembered by those who got to know him. “He had sharp one liners. He was a man of few words, but when he did say something, it would sting a little bit.”

But above all, Cindy said Josh would be remembered for his ability to impact people’s lives.

“He’ll be remembered for his humility, for the ability that he had to affect people,” she said.  “He wasn’t looking for the spotlight. Hopefully, people will be inspired by him to do things for others, without needing the recognition.”