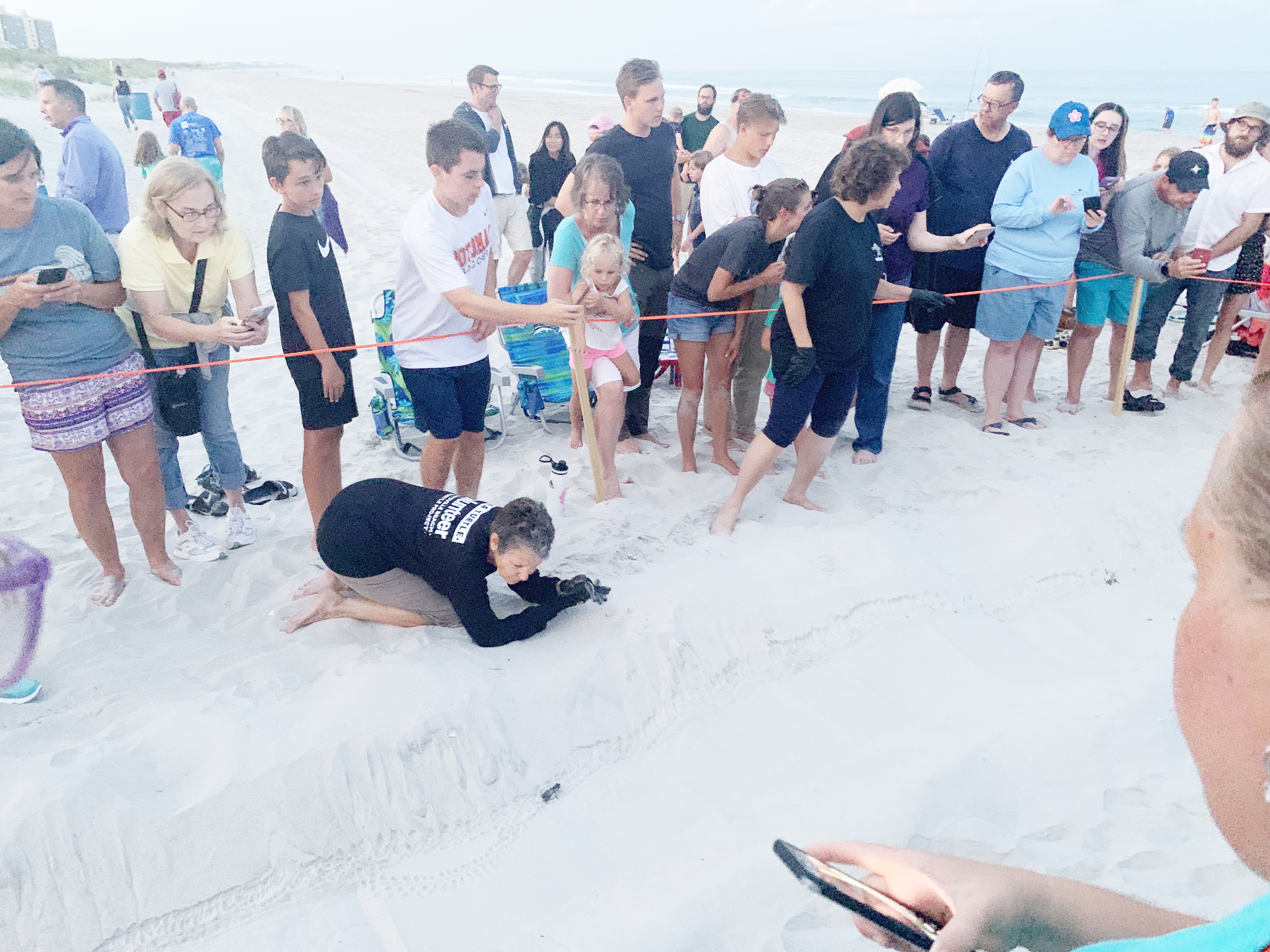 With what is the first of potentially many opportunities this summer, a large crowd gathered Wednesday night for the chance to see baby turtle hatchlings, as the Wrightsville Beach Sea Turtle Project conducted the first of what will be several turtle nest excavations scheduled to take place this summer.

The loggerhead sea turtle nest located next to public beach access no. 3 was the first of eight nests on Wrightsville Beach to hatch, an increase from only two nests on the island in 2018. Although Wrightsville Beach has seen as many as 15 nests at a time, eight is still above average, and the island is not alone in its increased numbers this year.

North Carolina as a whole is seeing hundreds of nests over the norm, said Hope Sutton, stewardship coordinator and southern sites manager at the N.C. National Estuarine Research Reserve.

So far, Masonboro Island has 73 nests, making 2019 the island’s biggest year since regular monitoring of the island started. It’s also more than double the island’s average amount of 28 nests.

Still, the season is not over, Sutton said. Last year nests were being discovered on Masonboro Island right up until the Hurricane Florence evacuations.

Cape Hatteras is also having a record-breaking year with 329 turtle nests and still a month left in the nesting season, according to WRAL.

Dozens of onlookers gathered to watch the two remaining turtles make their journey into the water. Volunteers brought around the shell of an adult loggerhead sea turtle, as well as replicas of their skull to show the crowd.

The initial hatching, which took place Sunday around midnight, saw the majority of turtles hatch at once with no issues. Prior to a hatching, the volunteers create a small ditch in the sand running from the nest to the ocean to help the turtles stay on route, as lights can distract or disorient them.

“The moon was out, and they all went out on their own,” another volunteer said.

However, the two remaining turtles required some assistance on the night of the excavation. Both were followed closely by volunteers to ensure they could make it to the water, one of which had an injured fin. This turtle was released from the nest to walk around and get some exercise before being brought to the turtle hospital in Topsail Beach.

“I’ve been doing it for a long time and it really never gets old,” volunteer Melanie Andrews said.

Andrews has been a volunteer for 20 years and frequently walks the beach to look for turtle tracks and check on already discovered nests.

The Wrightsville Beach Sea Turtle Project has about 60 volunteers, each of which is assigned one of the island’s six zones to cover, Andrews said. Between March 15 and August 31, these volunteers walk the beach to look for new nests, monitor marked nests and watch for signs of hatching.

Although some excavations can be difficult due to the large amounts of people and lights, this one went very well, Andrews said.