You are at:Home»News»Dorian’s storm surge brings disappointing end to a strong sea turtle nesting season
By Terry Lane on October 21, 2019 - 11:36 am News

While local sea turtle volunteers said they were thrilled about the active sea turtle nesting season on Wrightsville Beach, tropical weather brought a gloomy end to the season, as Hurricane Dorian’s storm surge likely smothered two of the remaining three nests on the beach. 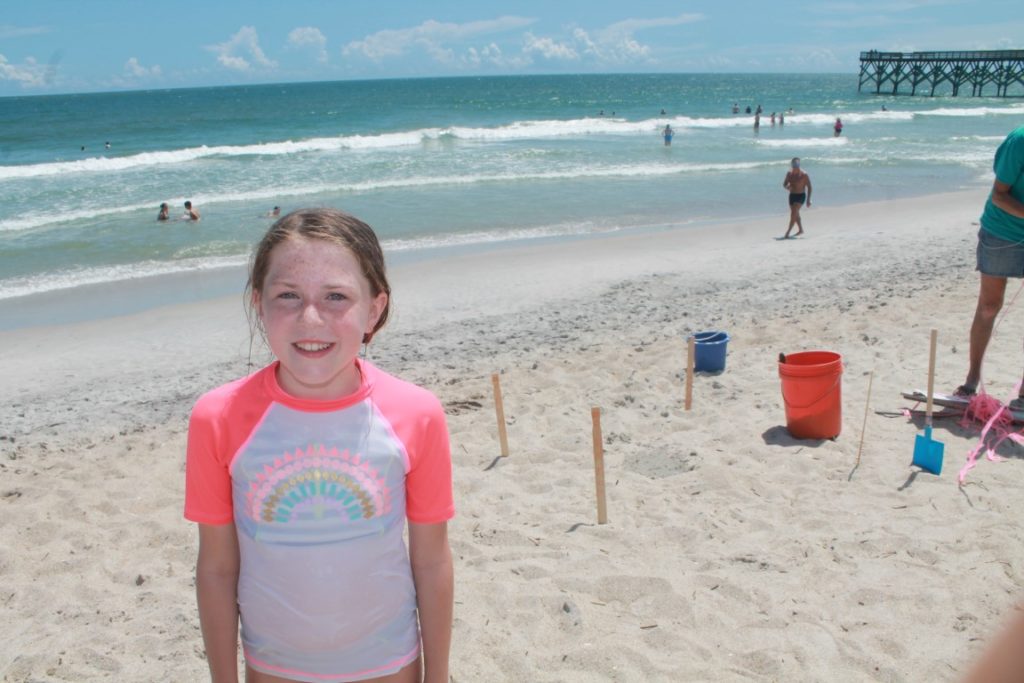 Andrea Jasak, 11, of Durham, by the sea turtle nest she found on Wrightsville Beach on
August 21. The nest hadn’t been discovered by volunteers during regular morning beach
walks. Staff photo by Terry Lane

With a total of 11 nests, the 2019 loggerhead sea turtle nesting season outpaced the 2018 season, which saw just two nests on Wrightsville Beach and may have been impacted by Hurricane Florence and the beach renourishment project. But while the 2019 total was the second-most recorded by the volunteers, surpassed only by the 15 nests found in 2016, Wrightsville Beach Sea Turtle Project director Nancy Fahey said two of the last three nests on the beach never matured, most likely due to the storm surge from September’s Dorian.

“Unfortunately, when you get into the fall months, nests are susceptible to storms,” Fahey said.

Of the final three nests remaining when Dorian passed near Wrightsville Beach in early September, only one hatched, volunteers discovered last week after performing the final nest excavations of the year. Of the 11 nests this year, eight hatched, though the fate of the turtles from one nest is unknown, after volunteers believed light may have distracted the hatchlings, though in one account, bystanders may have helped get some of the turtles to sea.

While Fahey said she didn’t know the extent of the storm surge in early September, judging by the time the nests were discovered, and the relative age of the unhatched eggs in the nests, she believed that the hurricane’s storm surge likely flooded the nests, preventing their hatching.

If loggerhead turtles don’t lay lay their nests far enough on shore, they can become inundated with water. In fact, one turtle laid her nest so close to the shore that volunteers who monitor the beach each morning hadn’t even discovered the nest.

“They’ll take some overwash, but when you get water in there over time, it impedes oxygen levels and eventually, the development of the embryos,” Fahey said.

On August 21, beachgoers near Crystal Pier on the south end were surprised to discover loggerhead hatchlings trying to get to the beach.

“I saw what I thought was a dead butterfly, but it was a sea turtle coming out of its nest,” said Andrea Josak, 11, of Durham, who discovered the nest. “I called my family over to see it when we saw another one that went into the ocean. We all made a circle with our clothes around the nest so people wouldn’t step on it.”

And while Fahey said at least a dozen from that nest survived and hatched, most didn’t, as volunteers waited fruitlessly that evening for the nest to fully hatch, but no more turtles emerged.

While most nests are dug into the dunes, this one had been buried just beyond the shoreline. The turtle likely dug her nest during a period where high tide occurred at sunrise, making it likely the tracks had been washed away, she said.

“We found a lot of unhatched eggs at the bottom of the nest,” Fahey said. “That’s why it’s so important to find the nests early.”