The party will resume for the North Carolina Holiday Flotilla this year, but facing higher costs, the organizers of Wrightsville Beach’s annual boat parade are looking to expand donations to help cover the costs of this year’s events.

This year’s flotilla will feature the return of the Friday party on the eve of the boat parade, and like in years past, it will be held at the Blockade Runner Beach Resort, which this year is the title sponsor of the event. However, instead of being called the “Captain’s Party,” this year’s fete will be known as the “Flotilla Launch Party.” Entertainment for this year’s party will be provided by Jack Jack 180, a local favorite known for playing pop, rock and dance hits, said flotilla committee chair Linda Brown. Tickets to the party on Friday, Nov. 29 are $35 and can be purchased  at https://www.ncholidayflotilla.org/. Organizers cancelled the party in 2018 after the Blockade Runner was forced to close for repairs following Hurricane Florence.

Once again, the flotilla will conclude with a fireworks display over Banks Channel, but it will be more costly for organizers, who are looking for new sources of funding to help cover a $5,000 jump in fireworks costs this year, with another anticipated price hike to come next year. To help cover the costs, organizers are offering a “Friend of the Flotilla” sponsorship, which can range from $25 to $245. “Friends of the Flotilla” will be featured on the website, along with other sponsors.

Brown said that the Friend of the Flotilla sponsorship is ideal for local residents who host parties during the event.

“We don’t mind throwing the party but we sure would like for you to help us,” she said. 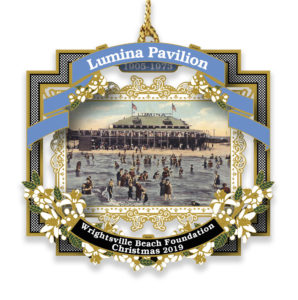 The Wrightsville Beach Foundation is selling a Christmas Tree ornament featuring a scene from the Lumina Pavilion. The ornament is a new tradition for the foundation, which is selling the ornaments for $27.50 and can be purchased through the website at https://www.wrightsvillebeachfoundation.org/christmas-ornament.

This year’s festival will feature a book signing by Mary Flinn, who is the author of Lumina, a novel published this year that is set in 1928 and features the classic Wrightsville Beach landmark the Lumina Pavilion as a backdrop. Brown said that Flinn would also be there to help promote a Christmas Tree ornament that the Wrightsville Beach Foundation is selling for the first time this year. The ornament features a scene from the Lumina Pavilion and cost $27.50. Brown said that the ornament will be a new yearly tradition from the Wrightsville Beach Foundation, which can be purchased here: https://www.wrightsvillebeachfoundation.org/christmas-ornament