Association seeks to raise at least $5,000 for fund at Officers’ Ball on Nov. 2

The new badges, which officers will be wearing through this October and in future years, were purchased through a donation to the Wrightsville Beach Police Department’s Recreational and Benevolent Association by Harold Laing, a longtime Wrightsville Beach resident who died at age 84 last month. 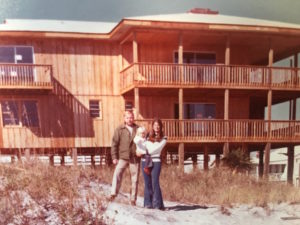 Harold, Kathy and Katie Laing in front of their newly build house on 10 Heron Street 1974

Laing told officers he wanted to make the donation to the fund to purchase the badges to honor his wife Kathy’s fight against breast cancer. Laing, who died on Sept. 29, is survived by his wife of more than 50 years, Katharine Gunster Laing, whose cancer is in remission.

“Breast cancer has been prevalent in our family,” said Laing’s daughter, Beverly Laing Andersson. “It meant a lot for him to do something.”

The donation will help support the memory and legacy of Harold Laing, who spent more than five decades building a local presence. 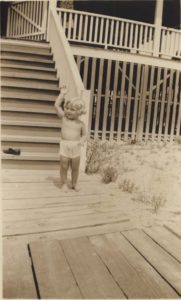 “He was married to my mother for 50 years, together they visited 50 countries, and he worked as a local attorney for 50 years,” Andersson said.

Laing grew up in a home on East Atlanta Street that was built in 1934. Later, the family moved to a house on Heron Street.  Laing graduated from New Hanover High School, earned three degrees from the University of North Carolina Chapel Hill and served as a Lieutenant Commander in the U.S. Navy for 22 years in both active and reserve duty.  Laing was also known for the garden’s he would maintain on his properties.

Laing’s donation comes as the Wrightsville Beach Police Department’s Recreational and Benevolent Association prepares for the 41st annual Police Officers’ Ball, which is scheduled for Saturday, Nov. 2 at the Holiday Inn. Tickets to the ball are $50, which includes a buffet dinner, live music and a wide range of raffle items. The ball raises approximately $5,000 for the benevolent association’s fund each year. Spon sorships ranging from $250 to $2,500 are also still available. 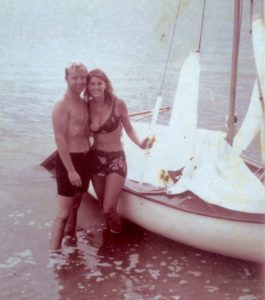 Wrightsville Beach Police Department’s Recreational and Benevolent Association administrator Cpl. Gunnar Matthews said that the fund provides support to local officers in a variety of ways. He said the fund was used to help support officers in New Hanover County after Hurricane Florence. The fund was used this year to help a Wrightsville Beach police officer to attend the funeral service of a relative, Matthews said. The fund has also been used to purchase gifts for Christmas gift drives for local disadvantaged youth.

Contact Diana Zeunen at (910) 256-7945 for more information about tickets or sponsorships to the  41st annual Police Officers’ Ball.