The Battle of Forks Road was fought in February 1863 for the control of Wilmington, its port and the Cape Fear River. In addition to the thousands of Union and Confederate troops that fought in the battle, 1,600 from the United States Colored Troops fought for the Union. 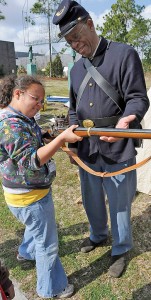 Dr. Malcolm Beech, a USCT re-enactor and president of USCT Living History Association, has participated in the Battle of Forks Road  Civil War Living History Weekend at the Cameron Art Museum nearly every year and said he became interested in the USCT after seeing a memorial for the USCT in Washington, D.C.

“I got involved in 1998 in Washington, D.C., when there was the erection of an African-American Civil War memorial that memorialized the 200,000 African-American soldiers that fought with the Union. From that point on I got interested in the story,” Beech said. “In 2001 we founded a museum in Kinston to reflect the history of the United States Colored Troops.”

Now, every year Beech educates Civil War Weekend visitors about the history of the USCT.

“At my station I talk about the U.S. Colored Troops and how the ex-slaves escaped and joined the Union forces, and how they came back to free their mothers, fathers, sisters and brothers,” he said.

Around 6,000 troops from the USCT enlisted from North Carolina, 45 of whom were from Beech’s Kinston hometown. Beech believes the authorization for African Americans to fight in the Union army was the key to the North’s victory. Too often, that story is left out, Beech said.

“[Children] never hear about it in their classrooms, this is the part of the Civil War they don’t really know; in fact, most people don’t know, not just kids,” he said. “The North was trying to save the Union, the South was fighting for states’ rights, but these soldiers were fighting for their freedom so they were highly motivated.”

The story of the USCT will be just one of the many relayed during the two-day event at the museum. CAM communications manager Kim Kelly said more than 200 re-enactors and around 1,500 patrons are expected.

One event that became very popular in the 2014 Civil War Weekend was the Voices from the Front feature, which will take place Saturday evening. The feature consists of individuals placed behind screens reading authentic letters from the Civil War while the Huckleberry Brothers perform period music. The letters are from Union and Confederate troops, USCT troops and slaves.

“You are set up in a square and the audience is facing each other while listening so it gives you space to visualize what you are hearing and they are all powerful because they are some really personal stories,” Kelly said.

The sounds of period music, canon fire and battle cries will echo through the grounds surrounding the Cameron Art Museum the weekend of Saturday, Feb. 7, for the 10th annual CAM Civil War Weekend to commemorate the Battle of Forks Road.

For a full schedule of events, including times for battle re-enactments, visit www.battleofforksroad.org