According to Reid Hawkins, a science officer at the National Weather Service’s Wilmington branch, two or three inches of rain would not normally warrant a flood warning, but since the ground is already saturated with water from the last three weeks of steady rainfall, low-lying areas are now at risk for flooding. 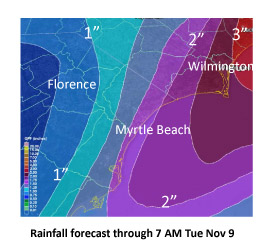 However, the Cape Fear River is not expected to flood. Nine other local rivers, including the Lumber River in Lumberton, N.C., have already flooded.

Hawkins advises people with businesses or residences in low-lying land to move their belongings to higher ground. He also warns people to exercise caution while driving or walking outdoors.

“If you see water of an unknown depth, turn around,” he said.

Hawkins expects Tropical Storm Kate to have little impact on the residents of southeastern North Carolina. However, he said boaters should expect swells and high winds.