You are at:Home»News»Bluegrass styles come together in Wrightsville Beach
By Terry Lane on April 20, 2017 - 10:30 am News

Each Wednesday night in Wrightsville Beach, two rival factions make peace in the spirit of music and entertainment. It’s not the Republicans and Democrats, the Tar Heels and Wolf Pack or even cats and dogs. It’s old-time and bluegrass.

To the patrons of Jimmy’s at Red Dogs there to hear the banjos, fiddles and guitars, most don’t know that the weekly gathering of musicians serves as a melting pot for different early American folk music that is now generally termed “bluegrass.”

And unlike other North Carolina locations experiencing a revival in “bluegrass” music, Wrightsville Beach is one of the few spots where players of the “old-time” style can get along with “bluegrass” musicians.

“I’ve played in Asheville, Greensboro, but this is the only place where old-time and bluegrass mix,” said “big” Al Hall, the organizer of the informal group of musicians.

“It must be the beach,” retorted Wes Chappell, a regular player with the group. “I like everything. I say mix it all up, it’s just music.” 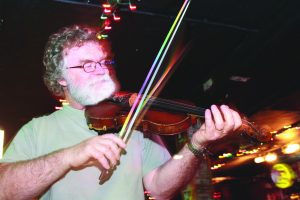 Wes Chappell gets a colorful spectrum from “Aurora Bowrealis” while playing fiddle during the Wednesday night bluegrass jam at Jimmy’s at Red Dogs in Wrightsville Beach. Staff photo by Terry Lane.

The regular Wednesday performances are drawing in some of the area’s top artists, who can feel free to mix the different styles of American folk music, Hall said.

“I like everything, to me, I say mix it all up. It’s just music,” said Chappell, who often plays fiddle with the group, using his prismatic bow known as “Aurora Bowrealis.”

The group features a range of musicians and instruments. Another frequent participant, Bryan Humphrey, will play the concertina, an accordion-like instrument. Mandolins are also common, Hall said, and sometimes even a banjo uke, a cross between a banjo and a ukulele, will join the group.

Jimmy’s at Red Dogs owner Jimmy Gilleece said the bluegrass night is helping grow local exposure to unique musical style. On some summer evenings, the group will play on the sidewalk for passers-by, helping draw a few in.

“Some people have never heard it before and they’re amazed. These guys are some of the best players in the state,” Gilleece said. “We have a lot of regulars but each week, we have some new people come check it out too.”

Bluegrass music also invites public participation, especially dancing, Hall said. During the April 5 gathering, the group played a variation of “Happy Birthday” to Kelly Parker, who danced out a beat for the crew of five.

“As soon as she started dancing, we got a better rhythm,” Hall said.

The group is led by Hall, who has played with Chappell for more than 20 years after the two met in Roanoke, Va. playing bluegrass music. Chappell’s music talent is so broad, Hall said, that he picked up the fiddle to fill the hole need for the group.

“I heard that there weren’t many fiddle players, so I decided that I’ll play that,” Chappel said.

Other venues in the area also feature bluegrass music, including the regular performance on Sunday’s at Satellite Room in Wilmington, which Hall said is the largest bluegrass performance in the area.  At Waterline Brewing Company, the third Thursday of the month is that venue’s bluegrass night.