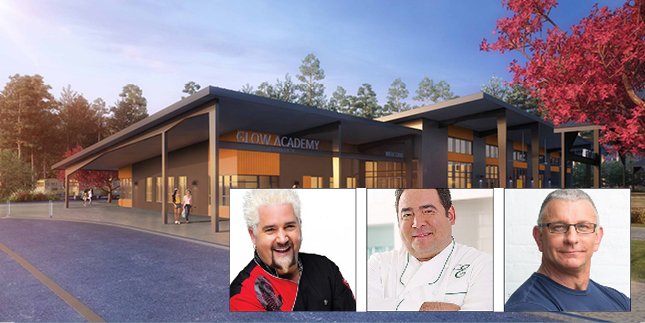 The Girls Leadership Academy of Wilmington, North Carolina’s only single gender charter school, is finishing construction of its middle and high school campus in anticipation of the start of the new school year.
GLOW NC, the non-profit foundation that supports GLOW Academy, also announced plans to celebrate the opening of the $16 million campus with the Food Network’s Celebrity Chefs Emeril Lagasse, Guy Fieri and Robert Irvine. All three will return to the school for the September 5th Grand Opening, which will include campus tours that are open to the public and a limited seating ribbon cutting ceremony.
The school, located on a 31-acre site near Maides Park, at the end of Sunglow Drive, will serve approximately 400 sixth through ninth grade students in the 2019/2020 academic year. The campus includes an 18,600 square-foot middle school building, a 19,183 square-foot high school building, an expansive media center, cafeteria, maker space, teaching kitchen, administrative offices and expansive outdoor learning areas. Construction began in mid-May last year.
The school will open for administrative staff later this month; the middle school and media center buildings will open by mid-July in time for the start of the school year; the high school building, which will also house the art studio, music studio and science lab, will be completed by mid-October.
A gala reception is also planned for donors and sponsors of GLOW Academy with tickets available for $250 each. The three chefs have each helped raise significant funds for the campus at annual celebrity chef events: Emeril Lagasse in 2016, Guy Fieri in 2018, and Robert Irvine in 2019. The celebrity chef events reflect the career of GLOW Academy Founder Judy Girard, who was president of the Food Network from 1994 to 2004.