After a Durham man died following a possible drowning on Wrightsville Beach’s South End, one nearby resident said he would ask to town to improve coverage for swimmers around the nearby Masonboro Inlet.

Eyewitnesses said that at about 4:10 p.m. on Sunday, Johnny Lee Vann, Jr., 35, was attempting to rescue several of his children in the ocean near Wrightsville Beach beach access no.43, according to a town of Wrightsville Beach press release. Vann, a father of seven, fell into trouble during the rescue attempt, the release said, and was removed from the ocean by emergency personnel, who had been dispatched to the area.

Beach access no.43 services the island’s South End, where the jetty wall separates Masonboro Inlet from Wrightsville Beach. The nearest lifeguard stand is stand no.13, located near the street access at Albright Street.

One beachgoer who saw the entire incident said that two members of Vann’s family were walking on the South End jetty wall on what was a relatively peaceful day at the beach.

“It was very calm. There was very little wind and no chop on the water,” said Andre Nel, a local charter captain who often visits the South End.

However, with the tide rising, the waters started ripping over the jetty wall, eventually knocking them into the water north of the jetty, Nel said. The two children appeared to be between 10 and 13 years old, he said, and they tried to swim back towards the jetty wall after falling in. While neither panicked at first, Nel said the current was too strong for them to make it back to the wall swimming.

“They made the fatal mistake of trying to swim back to the wall,” Nel said. “The current was too strong. If they had floated with the current they probably would have been okay. But they panicked.” 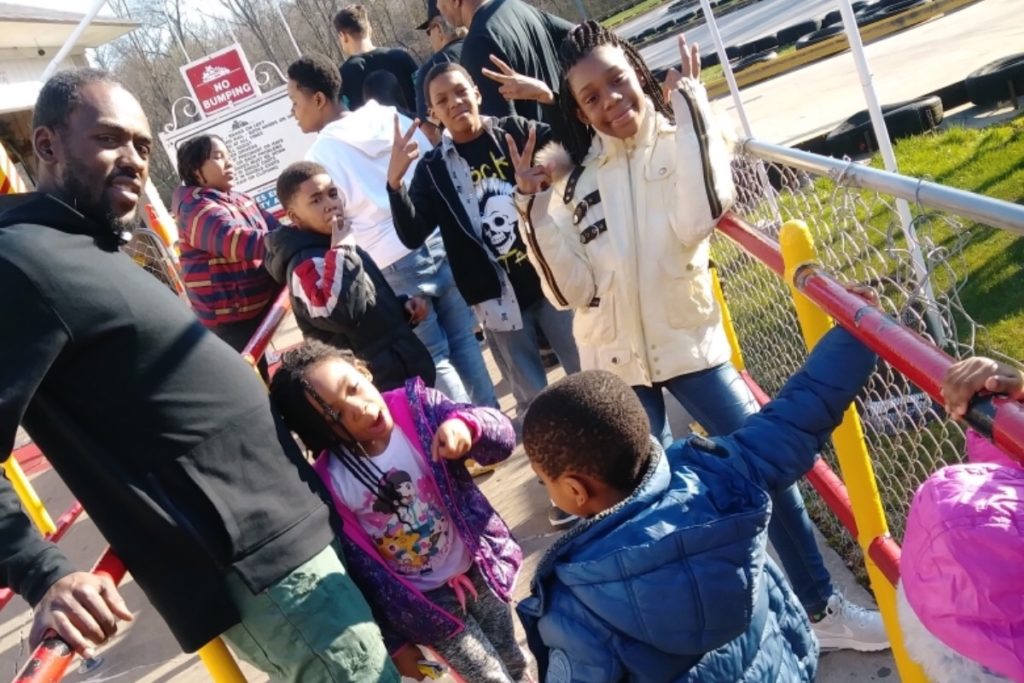 Johnny Lee Vann, Jr., left, with several of his children, two of which were successfully rescued from the ocean off
Wrightsville Beach on Sunday, July 14. Vann died in the rescue attempt after personnel were not able to revive him.
Officials said it was still unclear if it was a drowning or the result of a medical condition.

It was then that Vann, other members of the family and nearby Good Samaritans went into the water to try to rescue the kids. At one point, as many as nine people were in the water, said Nel, who sensed the danger in the situation and called 911 as soon as the children went into the water. Nel said that the first of two Wrightsville Beach Ocean Rescue ATVs arrived within three to four minutes of the call. Wrightsville Beach Police Capt. Jason Bishop said that a police patrol arrived within three minutes of the call, where lifeguards were already on scene.

Wrightsville Beach Police said a total of three of Vann’s children were in the water, with Nel indicating that one may have gone in to help the siblings, while Vann successfully got one of his children back to shore.

But in the effort to get another of his children back to shore, Vann began to struggle and went underwater, Nel said. Other bystanders were able to get Vann to shore and two began CPR on him.

Once emergency personnel arrived, they continued to perform CPR on Vann for approximately 30 to 45 minutes, Nel said. Wrightsville Beach officials said it was unclear if Vann died of drowning or of another medical condition.

Nel said he believed that Vann may have had a heart attack, noting the labored and gasping breathing known as agonal breathing.

Rescue personnel on scene did everything they could to try to revive Vann, Nel said.

“They tried everything. They did their very best,” he said.

Nel said he didn’t believe that lifeguards at stand No. 13, the southernmost lifeguard stand, could see what was happening. He said had a lifeguard stand been located more closely to the jetty, that Vann might have survived the incident.

But Nel said that most troubling to him was the fact that signage warning swimmers of the dangers of the jetty weren’t in the proper place. While one that was on the jetty was blown away after Hurricane Florence, the other sign on a nearby dune wasn’t easy for swimmers to see. Nel, a frequent swimmer on Wrightsville Beach, said he believes the area around the jetty and the area on the southernmost tip of the island are the most dangerous places to swim on Wrightsville Beach.

Robert Sam Myer, who lives near the South End, said that swimming conditions in the area south of the jetty and near the inlet can be hazardous and that he didn’t believe the area had enough coverage by lifeguards.

“Ocean rescue does a great job and they did everything they could to save him,” Myer said. “But the inlet has terrible currents and there has to be more coverage there.”

Myer said he was going to try to rally support from neighbors to press the town to improve water safety in the area. In addition to speaking with the town manager about options, Myer said he could raise the issue with the Wrightsville Beach Board of Aldermen if there is community support.

While Wrightsville Beach Ocean Rescue doesn’t have a lifeguard stand by the jetty, it does conduct periodic patrols on ATV and with rescue trucks. Myer said that he would ask whether the town could add a lifeguard stand in the area, or possibly move stand no. 13 further south to improve lifeguard coverage of the area.

At the least, Myer said it would be appropriate to add more signage to the area to warn people about the currents in the inlet.

Meanwhile, Wrightsville Beach Town Manager Tim Owens said that town officials would review whether they need to increase lifeguard coverage of the area, as well as look at adding more warning signs to the area. However, he said officials discourage anyone from swimming near the jetty and that by adding a lifeguard stand or moving stand no. 13 closer to the jetty, it could inadvertently encourage more swimmers in the area.

Owens said that officials believed the lifeguard response time was fairly quick and that rescue personnel did everything they could to try to save Vann.

“The ocean can be dangerous, even if you’re an experienced swimmer,” Owens said. “We encourage people who want to swim in the ocean to do so by a lifeguard stand. But swimmers can get in trouble in front of a lifeguard too. Having a stand there by the jetty might encourage people to swim there, which we don’t want.”

Meanwhile, a fundraising effort to help pay to have Vann laid to rest in Detroit has raised more than $40,000 towards the $50,000 goals. Donations can be made at https://www.gofundme.com/f/an-american-dad-hero.