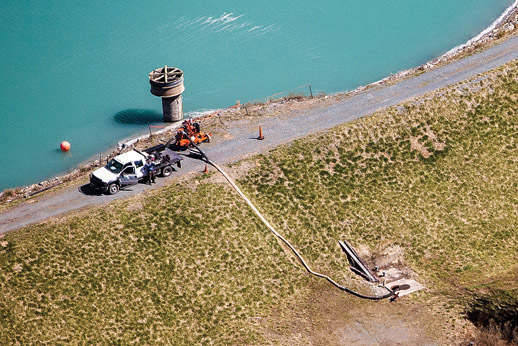 Kemp Burdette was on a simple mission at Duke Energy’s Cape Fear Power Plant on March 10.

Burdette, Riverkeeper with Cape Fear River Watch, suspected he would find wastewater seeping out of a high-hazard earthen dam. What he found were Duke employees illegally pumping wastewater from coal ash basins into a tributary of the Cape Fear River.

“We did not expect to see such blatant disregard for the law. We essentially got lucky in the act,” Burdette said during a March 26 phone interview.

Inspectors dispatched by the N.C. Department of Environment and Natural Resources to evaluate coal ash basins across the state following the Feb. 2 Dan River spill also stumbled upon the same scene at the Moncure plant in Chatham County one day later.

Pump records revealed 61 million gallons of wastewater contaminated with lead, mercury, arsenic, chromium and selenium were siphoned from two ash ponds throughout 109 days from September 2013 to March 2014. A notice of violation for the act was issued on March 20.

Duke has 30 days to respond to the citation. DENR Spokesperson Michele Walker said Duke could be fined up to $25,000 for each day of illegal pumping.

A March poll commissioned by the N.C. Sierra Club illustrates how publicized disasters like the Dan River spill affect opinions about water pollution and environmental regulation.

The more North Carolinians knew about the spill, the more they placed blame on Duke’s shoulders. Seventy percent of people who knew a lot about the spill cited Duke as responsible in an open-ended question.

“There’s a history of contamination in these sources and if we don’t … find better ways to deal with coal ash being generated, problems like this are going to keep coming up and they’re going to get bigger,” Keith said during a March 31 phone interview.

It is an opportunity for Keith and other environmental advocates to use public interest to enact solutions they have sought for years.

“In Wilmington, we’re trying to get municipalities involved … by briefing them on what’s going on at the Sutton plant. There have been some breaches in the past. … There are proven groundwater contamination issues in the community of Flemington,” Keith said.

Keith and Burdette will present a resolution to the City of Wilmington April 15, suggesting management strategies for the coal ash ponds at the Sutton Plant. A public presentation at The MC Erny Gallery will follow on April 28 at 7 p.m.

“We’re trying to elevate the issue and have this discussion, because it does impact us from the potential impacts of downstream surface water contamination to the closeout of Sutton and what we’re trying to do with the ponds in our backyard,” Keith said.

DENR officials inspected the coal ash ponds at the plant on February 20 and found the dams well maintained.

A DENR coal ash task force was assembled in February to consider permanent solutions for closed coal ash basins across the state.

“The department feels it has done everything it can do under the law and under our regulations,” Walker said on March 31, adding that officials are examining current regulations to determine if tightening is necessary.