You are at:Home»News»Community News»Surfing charity makes waves for kids without sight
By lumina on July 17, 2015 - 2:33 pm Community News, News

IndoJax Surf Charities celebrated its eighth annual Visually Impaired Surf Camp at Blockade Runner July 17, where visitors to the event learned about how surfing is helping special needs children, including one who went on to become a world-famous surfer. 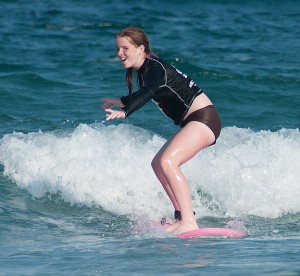 Staff photo by Allison Potter. Devin Adams rides a wave at the Indo Jax surf camp for the visually impaired on Thursday, July 17, 2014.

Event coordinators screened the film Beyond Sight: The Derek Rabelo Story for attendees. Rabelo, a world-famous professional surfer, was born blind. Rabelo has toured the world inspiring special needs kids, and spent the week surfing with the IndoJax camp.

Port City Community Church Pastor Mike Ashcraft, who opened the evening with a prayer, said the event was very helpful for the children.  “It has been a phenomenal week of surfing for kids with visual impairment,” he said.

Viorel first worked with special needs children as a teacher in southern California. His was the only classroom in the district with a wheelchair ramp, he said, so he taught many children who were disabled.

“I really loved teaching the underdog,” he said. After moving to Wrightsville Beach, Viorel realized surfing could be therapeutic for medically fragile and underprivileged youth. The first charity camp was for children born with HIV.

“I started a surf camp to pay for the charity. Now here we are and I’m just along for the ride,” he said. “We do about 12 to 15 free outreach camps for medically fragile and special needs children.”

The week taught children like Maddox Dean, a young participant from Asheville, N.C., to keep standing up whenever he falls down. His mother, Amy, said the volunteers were awesome. “We will be back every year,” she said.

This lesson in perseverance impacted the instructors as well. Nick Maciel and Craig Jacobs visited from California to volunteer with the camp.

“They learn how to overcome their own struggles and what they need to do to ride,” Maciel said. Jacobs added: “Their self-esteem improves so much.”

Maddie Ashcraft, instructor and event coordinator, said she could never give back to the kids and much as they give her. “Personally, I think they’ve impacted me more than I’ve impacted them,” she said.