As Wrightsville Beach began to crawl its way back to life on Tuesday, and the first businesses opening their doors on Wednesday, many of the town residents began to find the true nature of the damage that Hurricane Florence brought with it, Mayor Bill Blair said in a Wednesday night interview.

“There were a lot of places that looked normal from the outside, but suffered significant damage on the inside,” Blair said.

The initial reports seemed to show that Wrightsville Beach had mostly dogged the worst from the hurricane, which was initially forecast to be Category 4 storm but had weakened to a Category 1 storm by the time the eye passed almost directly over the town on Friday, Sept.14. The town’s recent beach renourishment project had done its job, town officials said, and the dunes had held back the ocean. Many streets suffered a foot or more of flooding and the winds caused some minor structural damage to buildings and homes across the town, mainly taking off shingles, gutters and siding. Residents following the town’s efforts to document the damage through Facebook live videos saw structures that may have had some damage from minor flooding, but no serious structural damage. 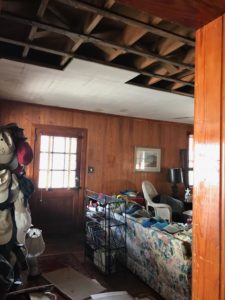 But what followed was a heavy night of rains and winds on Saturday that delivered a surprise to many who thought they had weathered the worst of the storm, Blair said.

Now, town officials and residents alike have Thursday and part of Friday to properly assess the damage in order to deliver an estimate to the Federal Emergency Management Agency.

After opening the beach to residents and designated contractors on Tuesday, Sept. 18, the town opened access to all visitors on Wednesday, though still enforcing the 8 p.m. curfew it had set. Opening access made it easier for more people to come onto the island to assess the damage, which will be important when it comes calculating a damage assessment for FEMA.

“All of it was rain damage,” Blair said. “Our overall assessment was that we had fared well given what we were facing, but it was marginally worse than we thought to begin with. While the initial damage assessment can be changed, we don’t want to report only half of the true damage. And the only way to determine the damage is for people going into their houses to inspect it themselves.”

On the Lumina News Facebook page announcing the decision to open the island, some people said it was too early to allow unrestricted access. But Blair said that he had received few complaints and that most were appreciative to have the ability to bring in contractors and other professionals to help with the assessments.

One of the areas hit hardest by the rain was the Sea Oat Condominium complex on Sea Oats Lane, which is just south of the Holiday Inn on North Lumina Avenue, wedged in between the Islander Condominiums and the Surf Club.

“You saw a little bit of roof damage, but you wouldn’t have thought that the damage was that bad,” Blair said. “But the HOA president reported a lot of wetness inside the houses.”

Blair said that the winds blew off chimney caps, roof caps and shingles and otherwise created many fissures in roofs that allowed the water to seep in from the Saturday night rains.

Despite the rain damage to houses and business, Blair said the town fared well.

“Normalcy is returning,” he said. “To go from 90 mph winds last week to having power back on Tuesday, it doesn’t get much better than that.”

“We were lucky. Our neighbors to the north and south didn’t fare as well,” House said. “The eye came over almost perfectly we didn’t get the wind and water surge. It was ideal for Wrightsville Beach.”

Blair said that the town staff performed remarkably well, focusing particular attention on the work of the public works department, which worked day and night to restore the town’s water and sewer system, a critical element for facilitating the return.

“They worked their butts off,” he said.

He also cited the work of the Wrightsville Beach Police Department administrator Diana Zeunen, who posted dozens of videos to the department’s Facebook page, while also fielding calls from the general public.

Residents who were anxious to get back onto the island found themselves facing several delays, mainly due to power outages, as well as the overwhelmed water and sewer system. Those hoping for a Sunday return soon saw the target pushed back to Monday until the town was finally able to announce the Tuesday, 7 a.m. return for residents.

Behind the scenes, the town staff was having meetings every two hours, scrambling to fix problems and plan for a return to the island. At first, town crews had to deal with low pressure of the sewer system, as lift station no. 1 had suffered damage that was further hampered by a blown generator to power the pumps.

Officials said that if residents tried to return at that time, the sewers wouldn’t be able to handle it, leading to an overflow that would push the sewage into the streets. Crews eventually found a work around to the problems with lift station no. 1, eventually building a partial bypass.

“Restoring the lift station is our most crucial priority,” town manager Tim Owens said at the time.

However, after the sewer problems were mainly fixed on Sunday, the restoration of electricity to Wrightsville Beach suffered a setback when two transformers blew. After that, leaks in the water system kept pressure too low, causing serious concerns about the ability for the town’s fire department to have enough water to fight any blazes that may start.

“We have a lot of wooden structures that are very close together,” House said on Monday. “If one of these houses caught fire, we could lose the whole island.”

The problems in the town’s aging water and sewer system will have to be addressed, Blair said, but he added that the board approved $10 million in upgrades during the last budget cycle. He said the town’s power generation system proved to be a disappointment and would press for better equipment.

Overall, Blair said the experience of the recovery efforts will prove valuable in many ways going forward. In addition to learning more about how to plan and prepare for a storm of this nature, the experience also helped bring the town’s staff and board of aldermen closer together. The aldermen and staff both stayed at the Hampton Inn on Eastwood Boulevard, just over the drawbridge. The proximity, along with stressful working conditions, helped forge new bonds, he said.

“We all hunkered down and got to know each other a lot better,” Blair said. “That’s going to pay off in the future.”

In other Hurricane Florence response news: