You are at:Home»News»Mills sworn in as mayor, new aldermen take seats on board
By Sherri Robinson on December 22, 2019 - 3:05 pm News 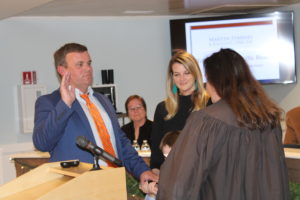 Jeff DeGroote is sworn in as a member of the Wrightsville Beach Board of Alderman. Photo by Sherri Robinson.

A new mayor and two new members of the board were sworn in during the Dec. 12 Wrightsville Beach Board of Aldermen meeting. 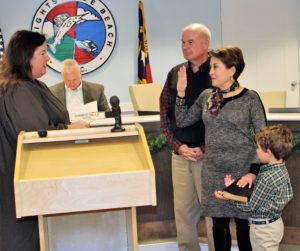 Zeke Partin takes the oath for Wrightsville Beach Board of Aldermen on Dec. 12, 2019.
Photo by Sherri Robinson.

After the new mayor and members were seated, the board elected Alderman Hank Miller to the position of Mayor Pro Tem, where he will serve mayoral duties in the mayor’s absence.
Mills was elected on Nov. 5, defeating attorney and political newcomer Greg Buscemi 480 votes to 216.

During the campaign, Mills touted the record of the current mayor and board of aldermen, citing the town’s building of a reserve fund of $10 million, with $5 million earmarked for potential future beach renourishment projects. Mills also said he would continue the board’s work on repairing and improving the town’s aging water and sewer system.

Mills has permanently resided at Wrightsville Beach since 1995. He is a graduate of UNC-Chapel Hill School of Law and practices law through his firm, F. Darryl Mills, PLLC. He has a son and a daughter; his daughter held the Bible on which he took his oath.

Town planning board veterans, DeGroote and Partin both ran unopposed for the two open seats on the board of alderman. DeGroote owns South End Surf Shop in Wrightsville Beach. Partin, in 2015, was appointed as the first female board member in the 80-year history of the New Hanover County Alcoholic Beverage Control Board, she now chairs that board.

During her career in state government, she served as the first female chief financial officer with the North Carolina Department of Transportation.

The next board of alderman meeting is scheduled for Wednesday, Jan. 15, at 5:30 pm.